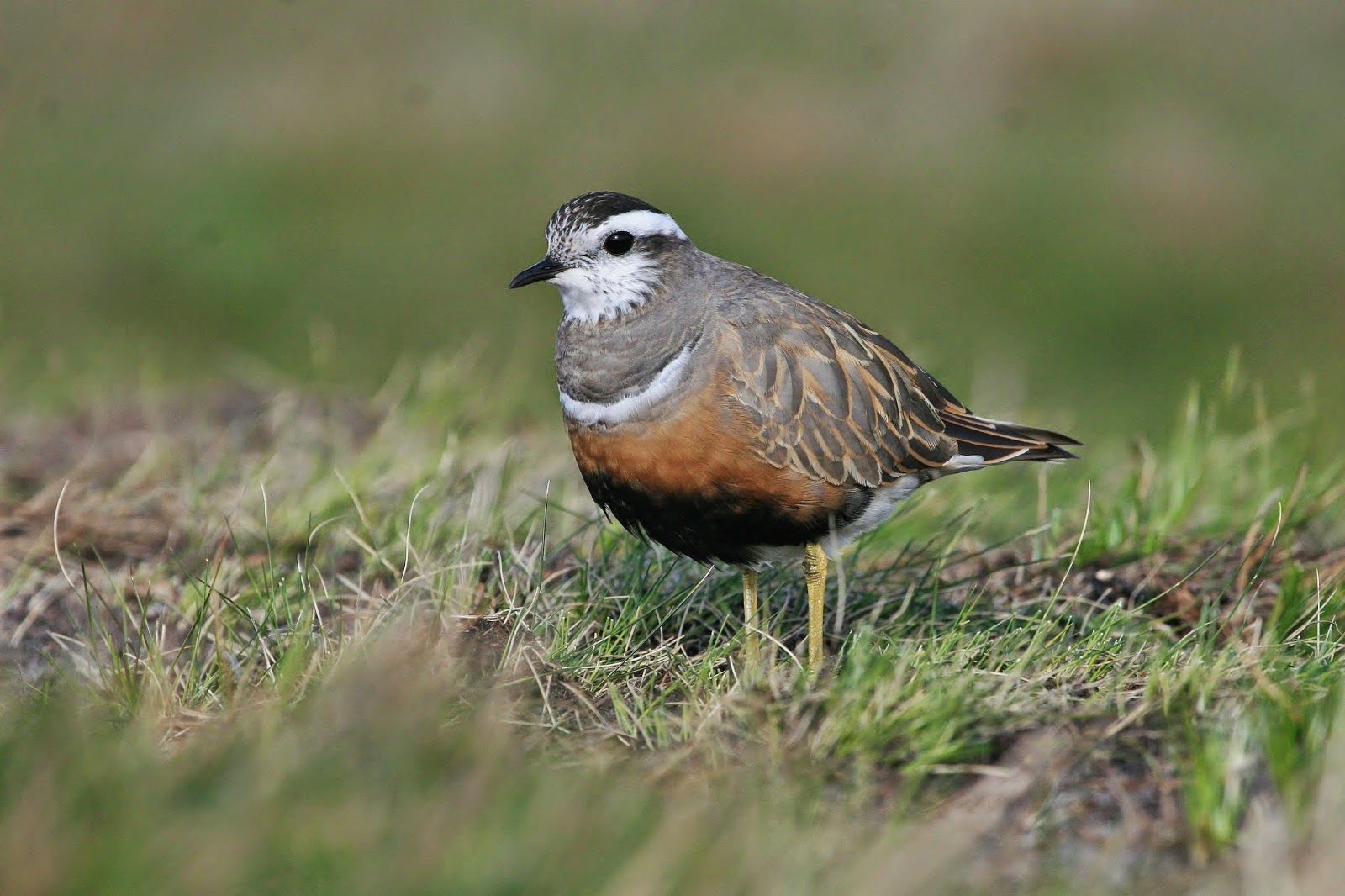 I made the yomp up to the summit of Pendle Hill to pay homage to the annual trip of Dotterel after work last night. I was treated to fantastic views of 2 females and 2 males. They really are just ridiculously good birds, so I will let the photos do the talking before I start waffling! 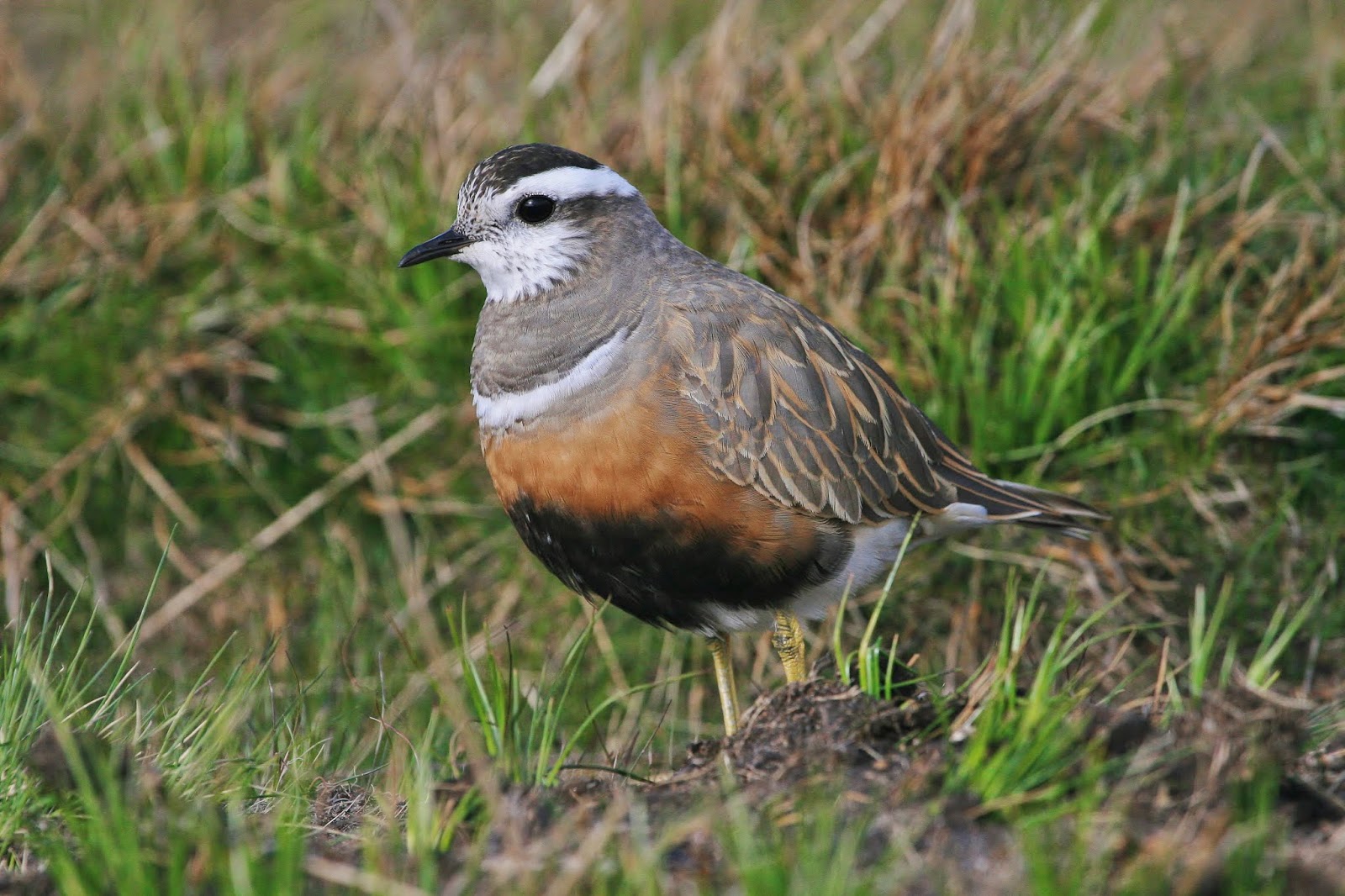 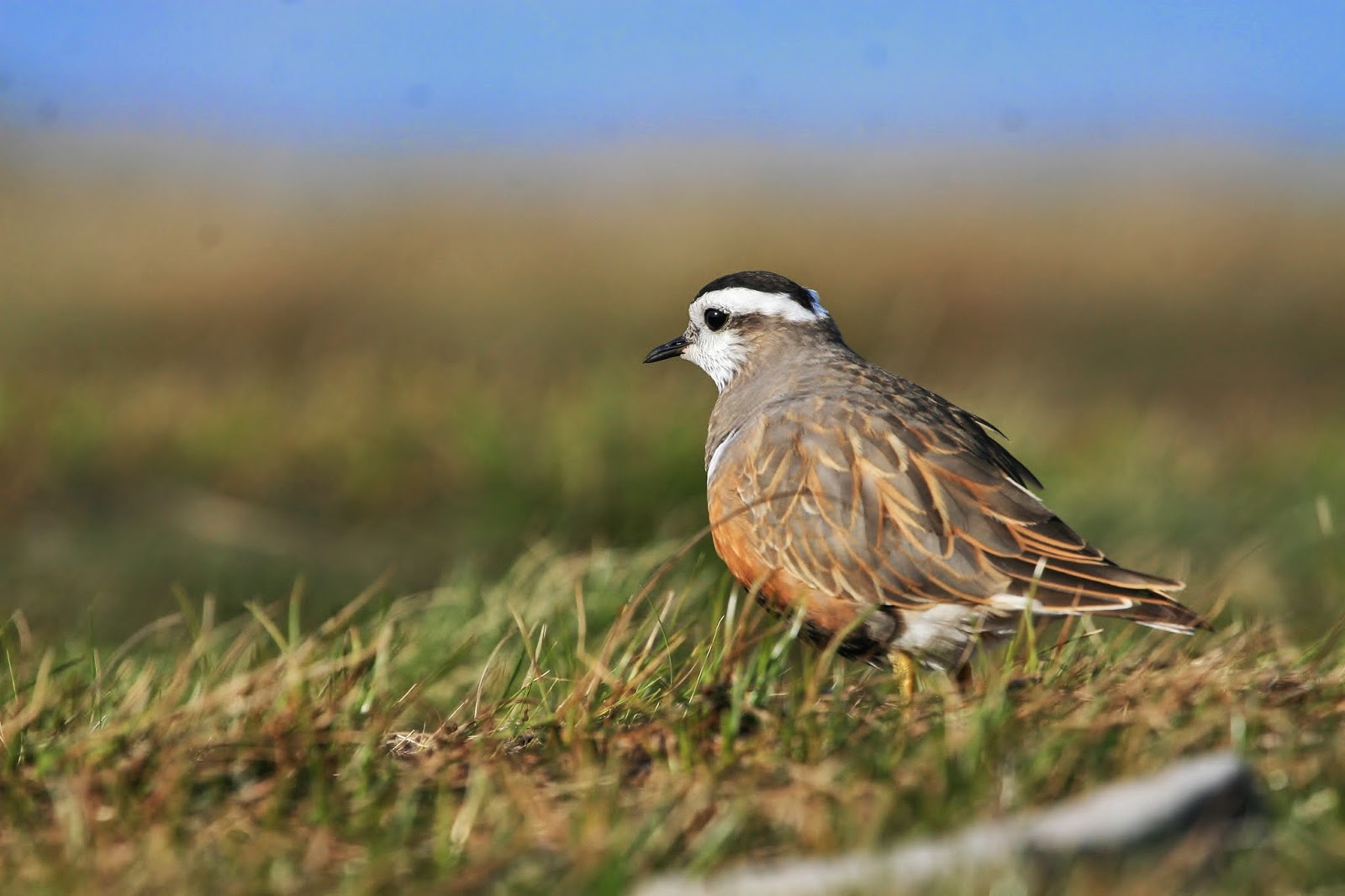 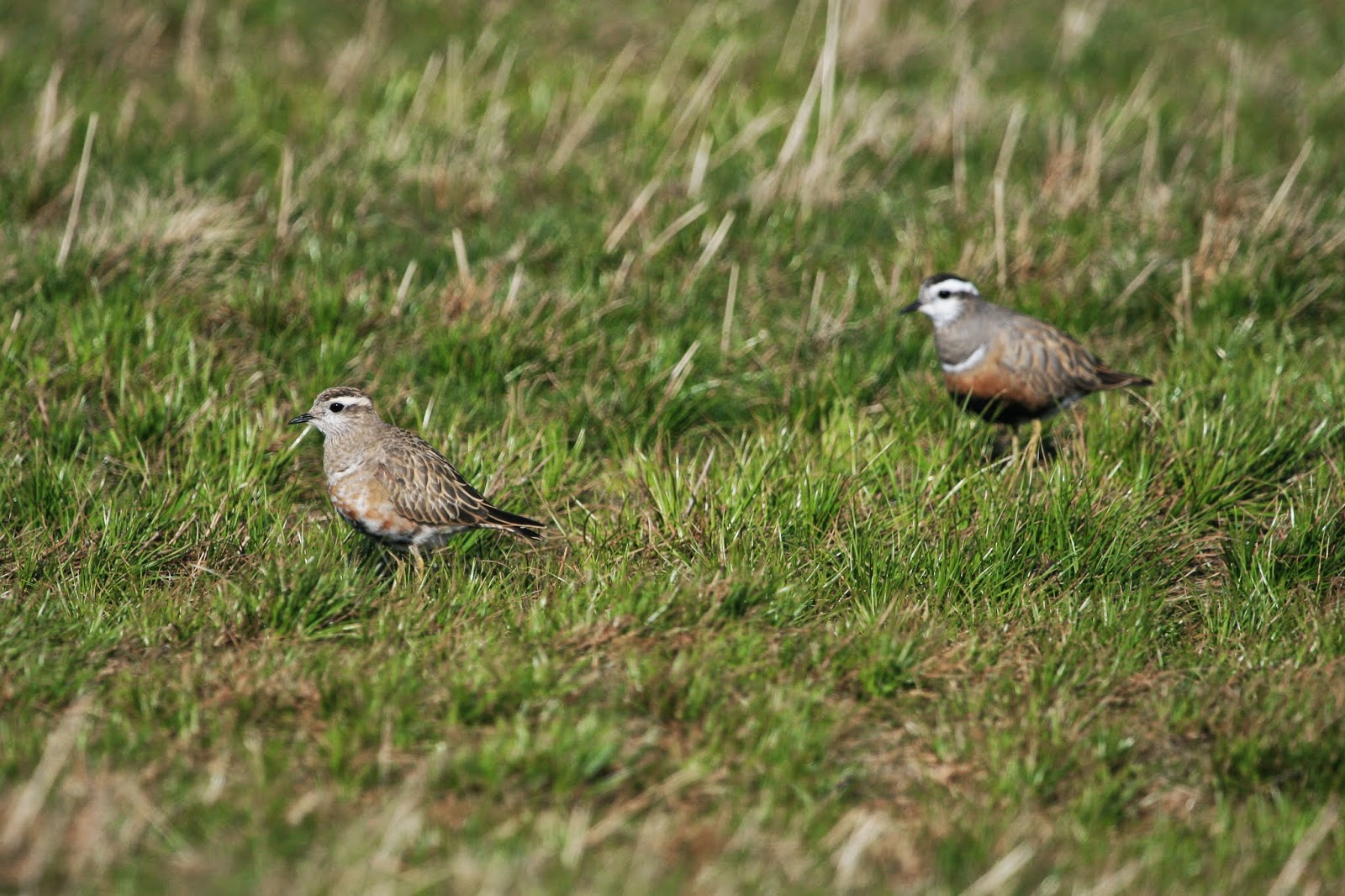 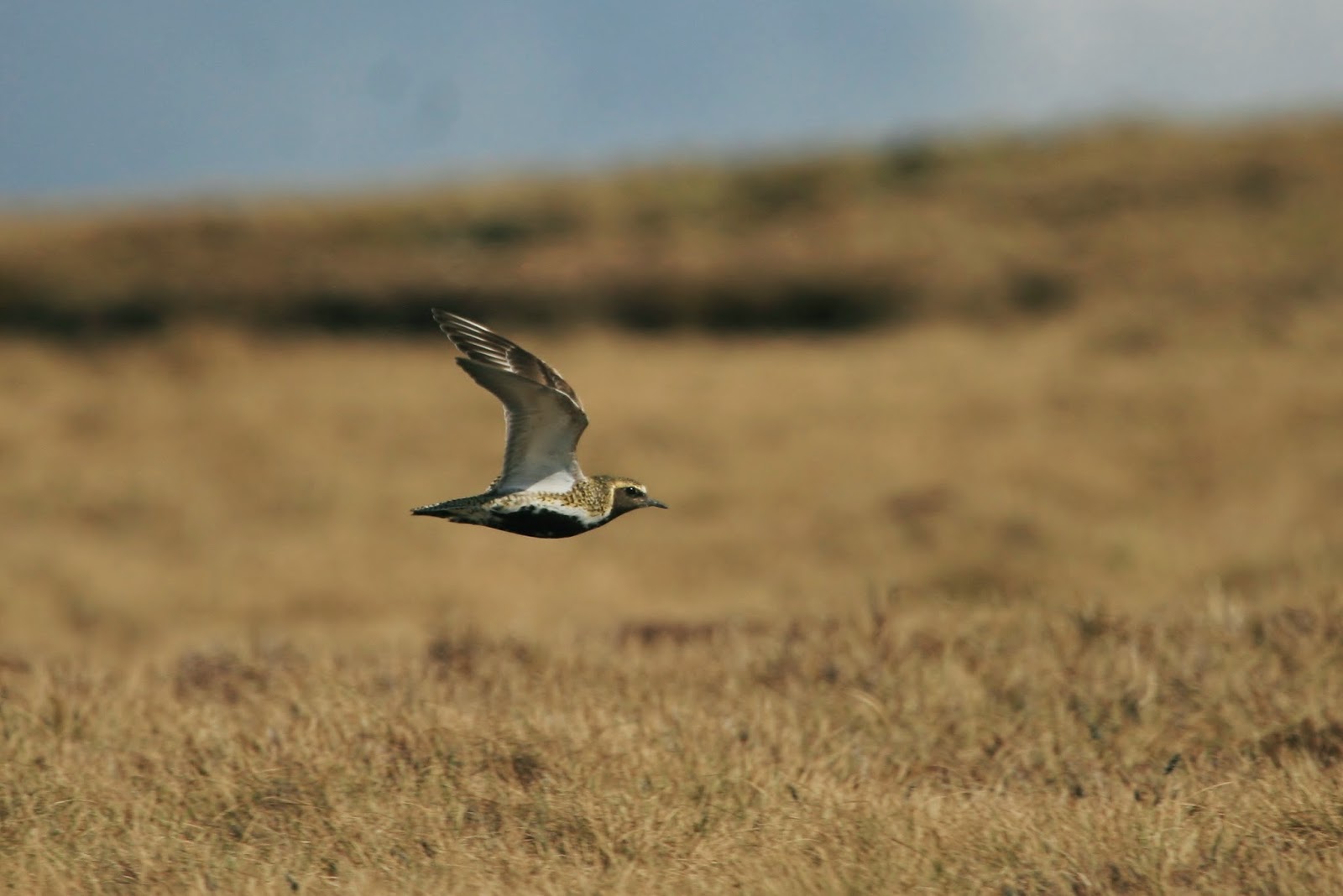 Nice Golden Plover seen singing too
Posted by Zac Hinchcliffe at 22:20:00 No comments:

April: The month of Yanks...apparently

Rather than bore you with a group of far too detailed trip reports of my recent twitches, I will lump them all into one and hopefully I will look back on April 2015 as nothing but ridiculously good!

First up, we have my recent day trip to the Scillies. Incredibly, Ash Fisher, who found the first UK Great Blue Heron in 2007 found his and the UK's second on the very same pool whilst sat in the very same spot he found the first at Lower Moors. By the time Scott, Liam and I got a chance to go and see it, the bird was refound (after being incredibly elusive the previous two twitchable days) on Big Pool on Bryher. Four hours on the archipelago saw us go from St. Mary's to Bryher and enjoyed great views of the Heron. Initially it was somewhat underwhelming as it sat in the middle of the pool looking very sorry for itself. It woke up and became very active showing off its very impressive neck, rufous carpal, buff toned thighs and rufous upper thighs and very dusky overall appearence. A bird I really didn't think I would see anytime soon! 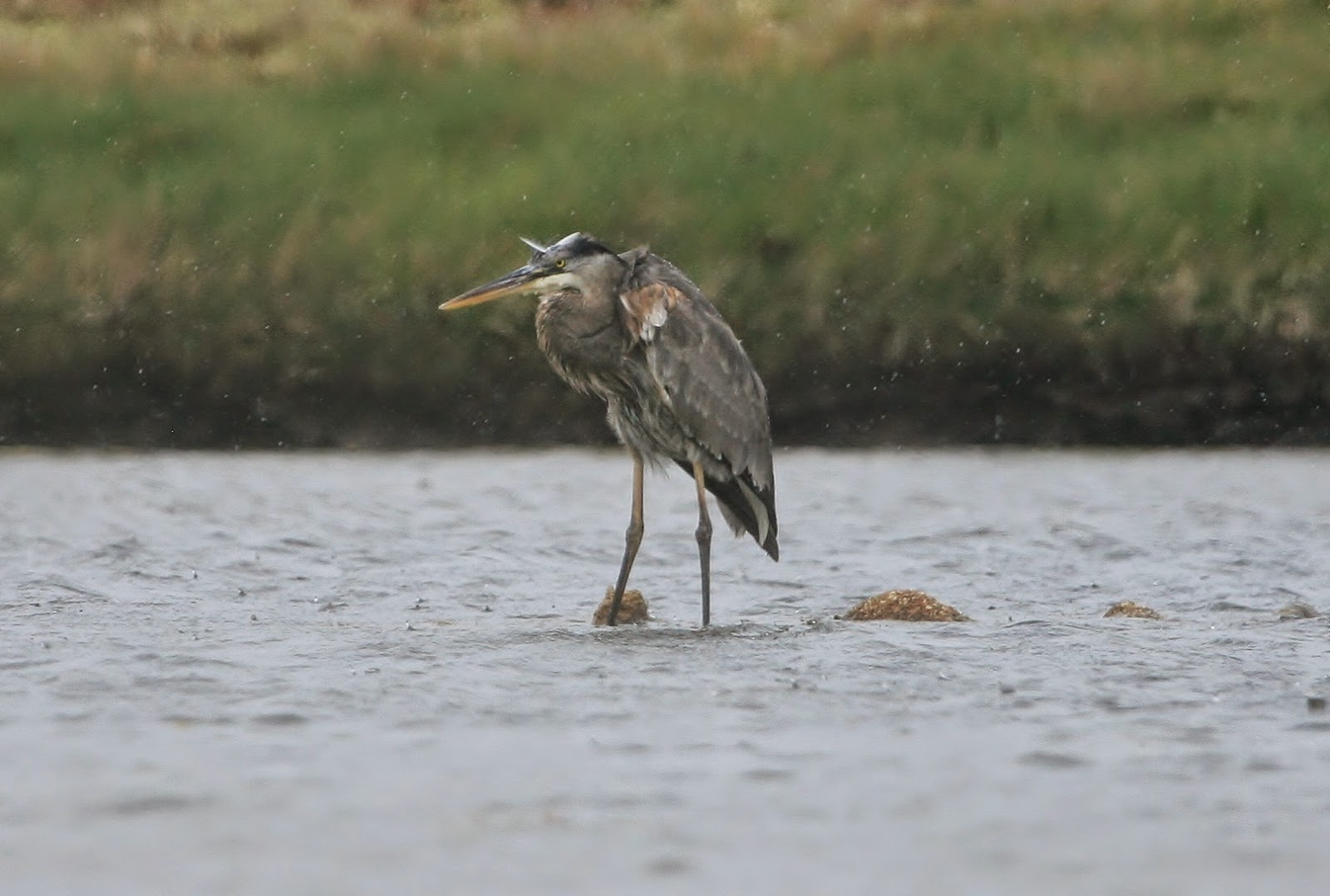 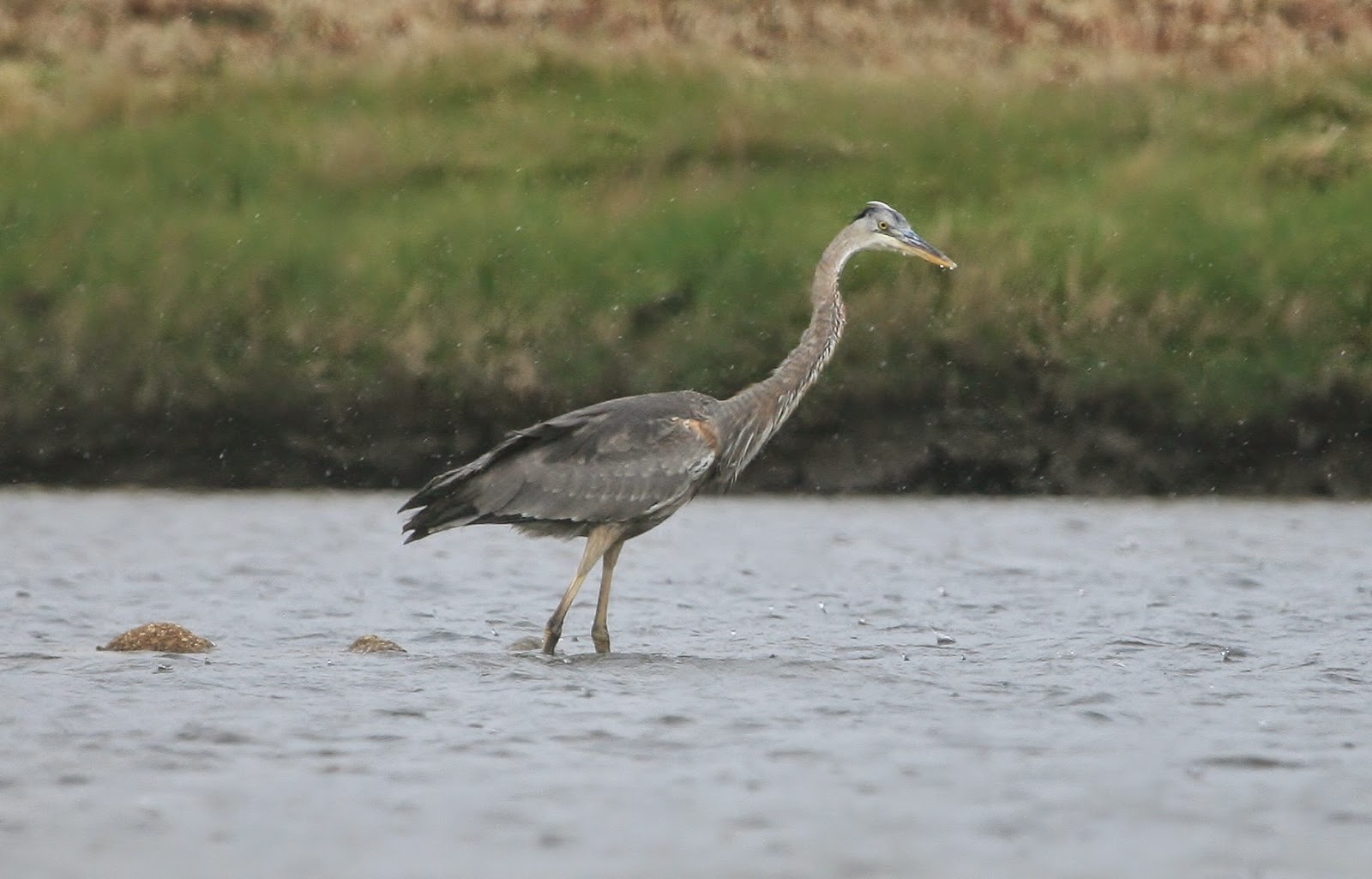 After enjoying super views of the heron, we chartered a boat to Tresco and made a quick sprint to Abbey Pool to see the long-staying Black Duck. The drake showed surprisingly well considering it was traditionally very shy. Though it may not be the most striking bird on the British List, it certainly isn't an easy bird to see as they are still very rare (in terms of individuals). A charter back to St. Mary's saw us have enough time for a celebratory pint in the Mermaid completed our fantastic short stop on my favourite place in Britain. To make it even better, I found a Basking Shark between St. Levan and Mousehole. Fantastic! 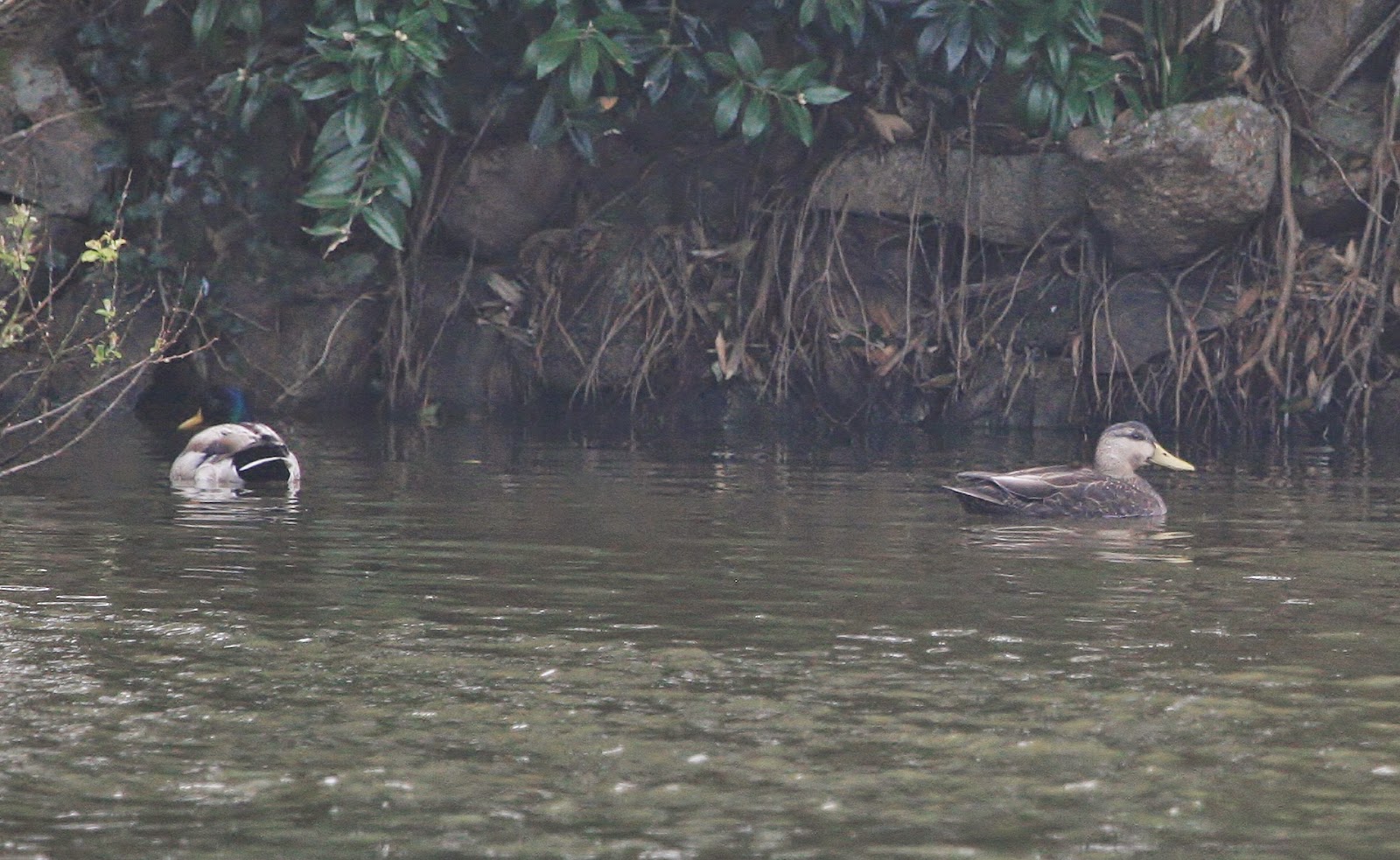 Only a week later, I was out again getting the train to Warrington to meet Alex and Steff (I thought my days of getting the train to meet friends was over when I got a car...That's second hand French cars for you!). We were planning on heading to Donna Nook to see the very stunning drake Blue-winged Teal. As the train pulled into the station, I had a quick check of Birdguides and was astonished to see a mega alert of a Hudsonian Godwit in Somerset! Good lord!
Needless to say, the teal was well and truly forgotten and we set course for the south. Three and a bit hours later, we were joining the already large assemblage of excited twitchers. The Godwit was still present and happily asleep. First impressions were 'Blimey! That's dark!'. The heavy barring underneath really made it stand out, even asleep and viewing through binoculars.
Occasionally it woke up and revealed it's lance-like two-toned bill. Later, when it moved a shades area, the bright orange tone to the bill really stood out, but that wasn't obvious against the clear sky reflection of the water. It began preening and a stretch of the wings was followed by 'oo's and 'aa's from the crows as it revealed its jet black underwing coverts. It later flew and again revealed just how striking these things are in flight, as well as the very thin wing-bar compared to the Blackwits. I always wanted this to be a good species in the flesh, but was worried it may be a little underwhelming when one eventually turned up. How wrong I was! It was utterly fantastic! Again, another massively rare bird I didn't expect to see for a very long time. Especially not in April in the middle of Somerset! A third for Britain and what is currently looking like a one day wonder (it was present the day before but only confirmed on day-2). A supporting cast of Wood Warbler, Wood Sandpiper, 4 Great White Egret, 3 Hobby and 2 reintroduced Crane made for a wonderful reserve I'll have to return to 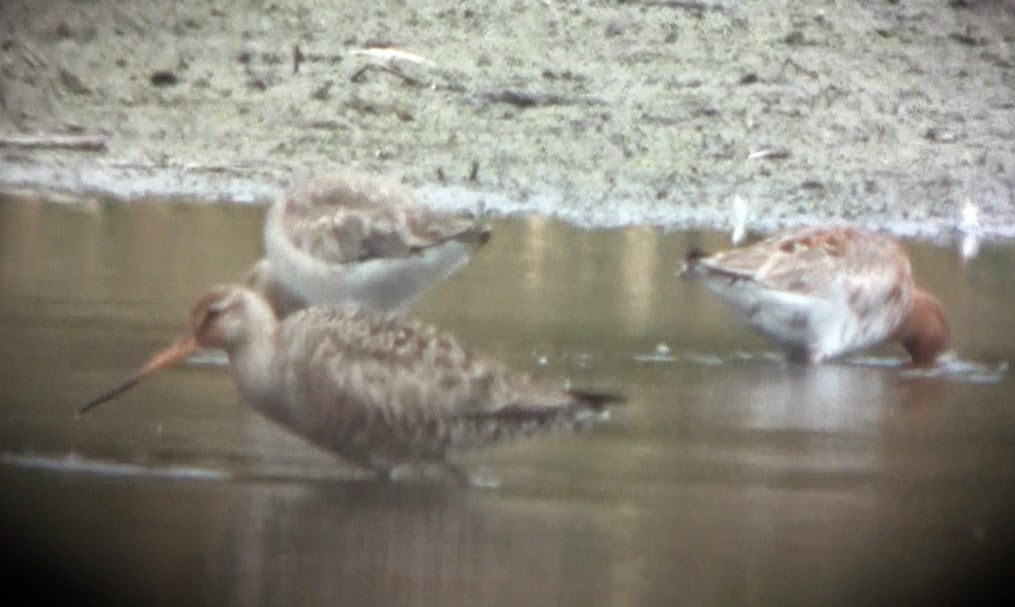 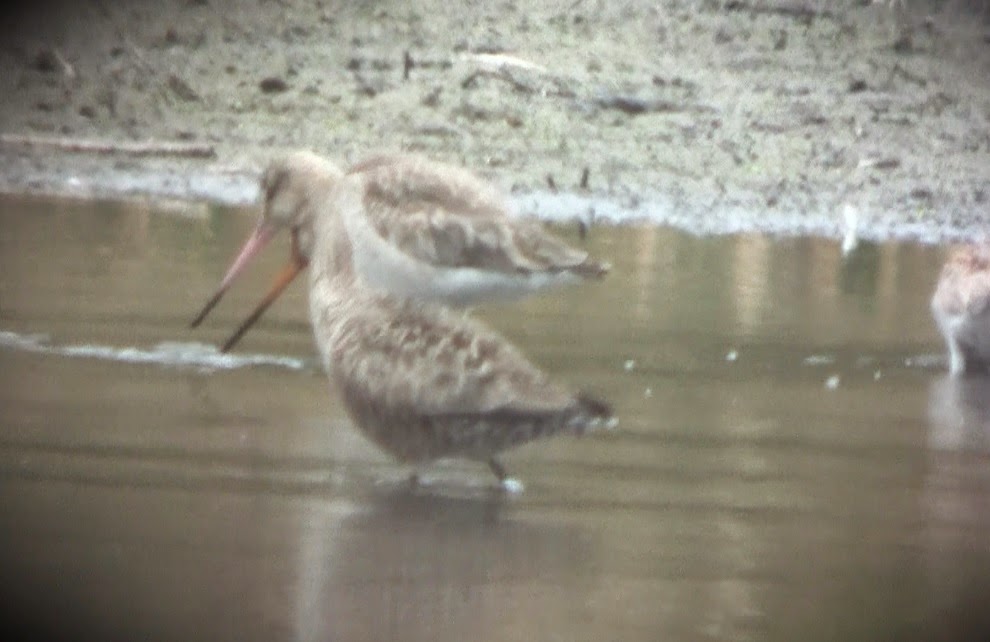 Of course it doesn't stop there! The journey home saw news break of a Pied-billed Grebe at Leighton Moss! A second for Lancashire. It looks like it's the same bird that was in Gloucestershire the day prior (an impressive movement!) and one I wanted very much to see. James Shergold picked me up at 5 this morning and we arrived at Lower Hide for about 5:45. A calling Spotted Crake, reeling Grasshopper Warbler, drake Garganey and 4 Otter showing fantastically would've made the trip more than worthwhile. The otters swam into the reeds and believe it or not, flushed out the grebe and it flew right in front of the hide (well...20m out). Only the second PBG I have seen and my first summer plumaged bird. What a gem! 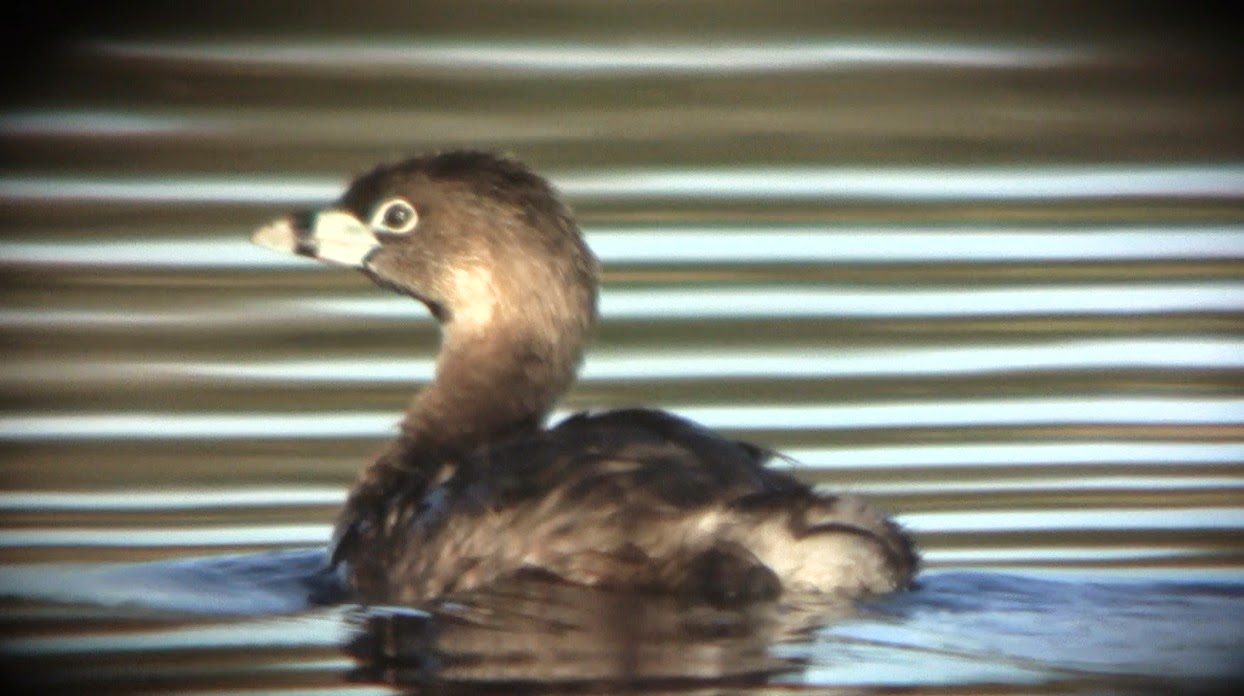 I doubt I'll get another chance to see another American vagrant before May, but there's probably more chance of that than seeing Hudsonian Godwit and Great Blue Heron in the same week!
Posted by Zac Hinchcliffe at 16:25:00 No comments: 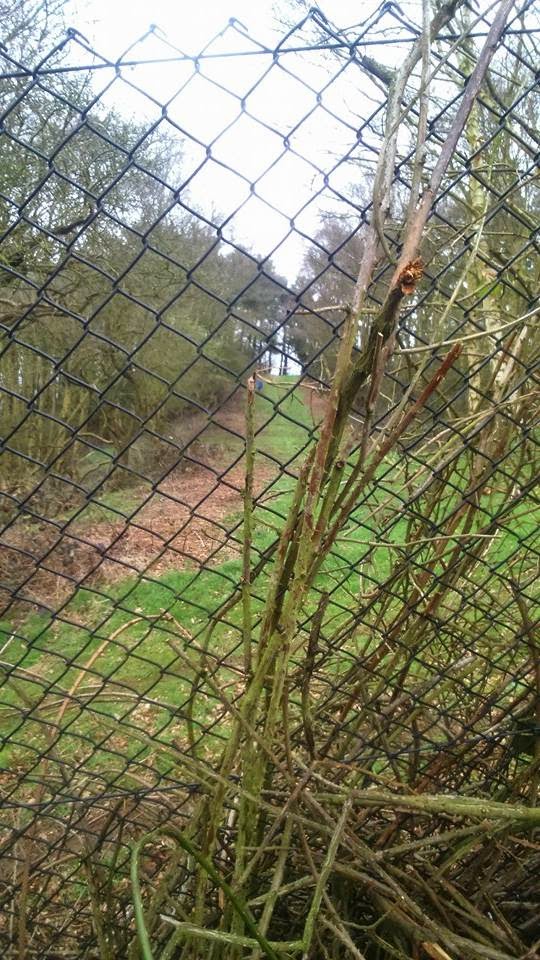 Whilst it used to be a past time for those in the know, standing on a muddy path and staring through this fence for hours on end has now become almost mainstream! 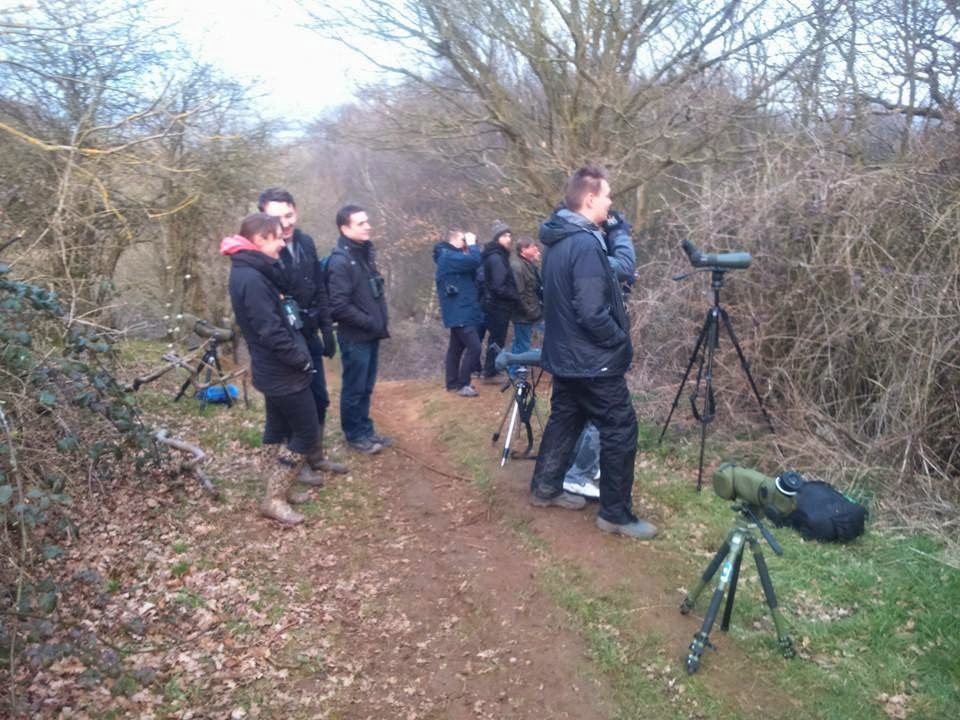 The assembled twitchers from the 'first' time around.
I have now been to Lidlington in Bedfordshire three times including twice this year. The reason being is because behind the fences of the Millbrook Proving ground car testing facility, it is believed that the last remaining Lady Amherst's Pheasant resides in the surrounding woodlands. There may well be others and some are of the opinion there are at least four other males, but anyway, as far as most people are concerned, just the lone male occasionally visible from the public footpath behind Lidlington is the last bird. He is almost certainly over 20 years old, so I was certainly very keen to put in a bit of effort to see him. If and when he dies, that may mean 'Lady A' becomes one of the biggest 'blockers' for the next generation.  In mid-March,
I went with Matt, Beth and Roland along with a few other NGBs. We set off from Rugby, so it wasn't too much of a hideously early start and we gave it all morning. Sadly, that was the first day it didn't show for quite a few days after seed had been put down in the open ride visible from the track. As much as it pained us, we decided to call it a day at midday. I was very disheartened for a variety of reasons. Mainly that I didn't really want to have to go back because it is a long way from Preston and it does seem strange to put in so much effort for a bird that derives from some birds a lord or lady once released!

After our visit, it all kicked off on Twitter and the news went out to everyone about the bird's location. It even started getting reported on the news service websites and seemed to be maintaining a relatively reliable pattern. I therefore decided that I had to give it another and get it seen once and for all. I therefore set off from Preston at 4am with Jonnie and we were onsite for 7. Rain was forecast for the whole day so we were very pleased to see it hold off until about half 1. It was certainly a test of our patience having to stand up for many hours without anything other than the occasional Robin and Blackbird. It took us seven hours of staring through the fence before we got our first momentary adrenaline rush as a pheasant appeared at the top of the rise. Sadly it was 'just' a female Common Pheasant, which was then joined by a second female and a male. They spent about ten minutes feeding on the newly installed seed hopper.

We were really starting to lose the will to live and I was feeling it standing up for so long with a painful back (I don't stand up all that often...I'm not just getting old!). Even young Jonnie was starting to feel it and went to the back of the group to have a sit down. Not sixty seconds after Jonnie sat down and I was almost ready to throw in the towel, a shape appeared at the top of the hill. It was very dark with a big white back on the belly and white behind the head. It was instantly recognisable and I let out a very audible gasp and I think that was what alerted the others that the bird was there! I couldn't quite believe my eyes! What an incredible looking bird! It was enormous! The tail was so long, the ruff on the head was incredible and when it had a shake, it revealed the blood red and gold rump. It walked back and forth twice on top of the rise and then walked into the vegetation on the left of the slope. Moving to the right, looking diagonally, I could see it stood in the bushes and a couple of us managed to get our scopes on it. Just as I got a decent view through the scope, it walked out back into the open and slowly accelerated right and out of view behind the top of the rise and that was it. 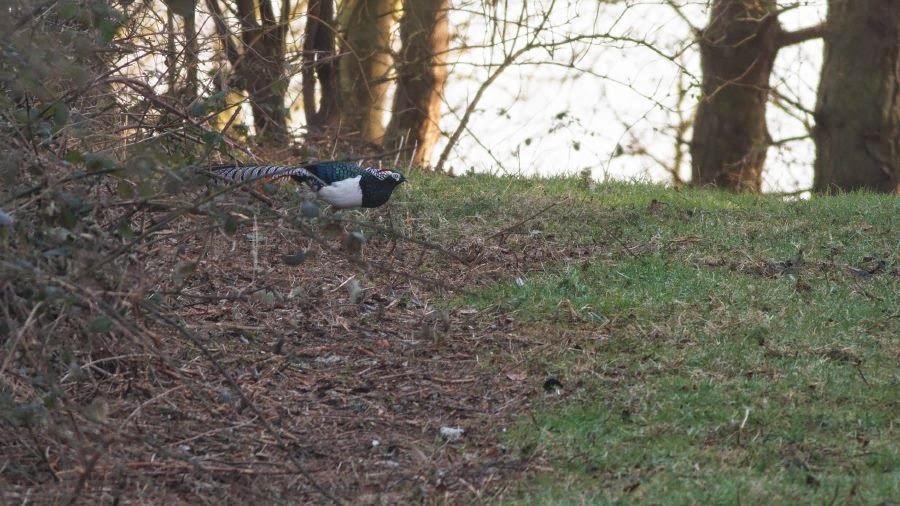 (Photo: Josh Jones from mid-March)
A nine hour wait for a single minute of pure elation. Some say twitching is a completely crazy past time, and on paper, I think I might agree with you, but to go from such a depressed feeling prior to it walking out, to the indescribable adrenaline rush when it walked out is exactly why I love this hobby! No matter what you think about this bird or even the species in general, you cannot deny that it is incredibly beautiful. I'm just happy I don't have to go back to that bloody ride again! Having said that, I would certainly go back and pay homage to a complete legend of a bird!
Posted by Zac Hinchcliffe at 17:39:00 2 comments: