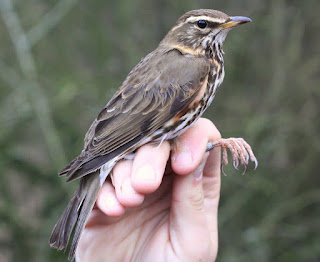 Today I went out ringing passerines for the first time since Sweden (except for a Swallow in September) so it was strange getting to terms with British ringing terms again and slightly different ageing and sexing criteria.
Redwings were certainly the main species of the day with 17 caught throughout the morning, along with a Chiffchaff, 3 Goldcrest and 3 Wren.
Totals for the mornings being:
Redwing - 17
Blackbird - 1
Song Thrush - 2
Coal Tit - 1
Blue Tit - 7
Great Tit - 10
Long-tailed Tit - (1 retrap)
Dunnock - 1
Robin - 1
Wren - 3
Goldcrest - 3
Chiffchaff - 1
House Sparrow - 5
Chaffinch - 11

A really lovely crisp morning with lots of Turdidae on the move. It was good to be out.
Posted by Zac Hinchcliffe at 16:49:00 1 comment: 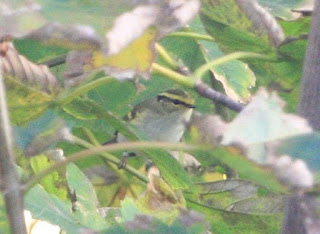 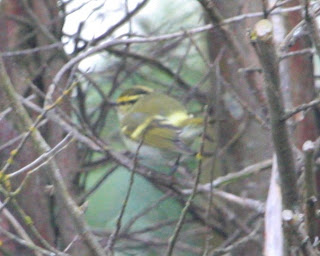 Visiting home for the weekend for my grandparents' diamond wedding anniversary, it happened to coincide with the presence of one of the prettiest birds on the British list being 'within reach'. I got up early and set off to Chris Batty's house in Knott End where he found a fantastic Pallas's Warbler feeding in a Sycamore in an adjacent garden earlier in the week! Arriving on site, I walked round the back of the house and joined Chris and 3 others who were looking at the bird. It proved rather elusive for a lot of the time, but occasionally, it would show itself fantastically at the front of its favourite Sycamore. I generally like to get a good photo from a twitch for the blog, but today, I thought that no matter how good my equipment was, I would never be able to show how beautiful this bird actually was in a photo, so I decided to fire off a couple of record shots to get the diagnostic features, and then soak in the beauty of the bird! What a little stunner and thank you very much to Chris Batty for allowing all us 'dirty twitchers' into your home.
Posted by Zac Hinchcliffe at 19:46:00 No comments: 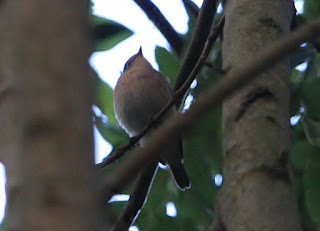 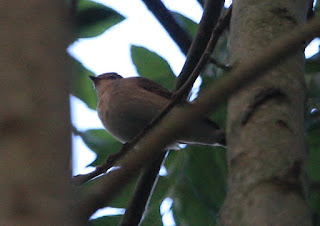 Chris Jones picked me up on his way to Breakwater CP to twitch the 1st winter Red-breasted Flycatcher that Ken found at lunchtime.
The bird had been seen 5 minutes before we arrived so were pretty hopeful, however the bird proved really difficult and it seemed like an age before I heard a rattle and a pipe coming from in the undergrowth. A bird landed on a branch in front of us at about 40 feet and I was rewarded with pleasing views of my first 'tickable' Red-breasted Fly. (I had frustratingly untickable views of a bird in Filey back in 2010)
The bird showed a lovely warm wash to the throat and obvious black and white tail as it cocked it's tail, as well as in flight. The bird was surprisingly vocal as well as being very mobile, so excuse the poor photos!
A really nice bird and a great bird to see locally!
Posted by Zac Hinchcliffe at 18:38:00 No comments:

Better late than never! I have had some real issues with my laptop over the last couple of weeks, so have not been able to blog about my awesome weekend with Chris Jones as we ventured to Dorset and South Yorkshire result in 2 lifers each. We started off by twitching (can it be called twitching if the bird has been present for so long!?) the Short-billed Dowitcher at Lodmoor RSPB. We were rewarded with really nice views down to 60 feet as it fed with Snipe, Lapwing and Black-headed Gulls. 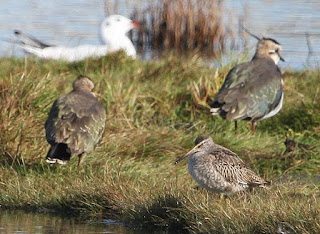 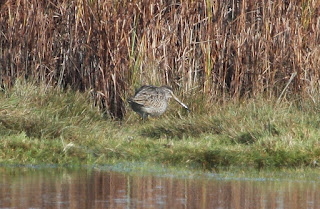 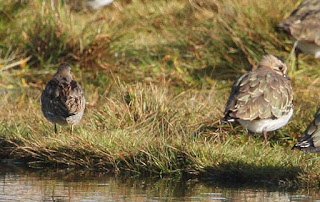 When the bird arrived it was in fresh juvenile plumage but has subsequently started it's moult into 1st winter plumage with some moulting of the scapulars and upper mantle feathering. The body feathers appeared to be very much 1st winter also. 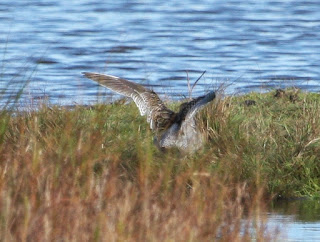 An extract from my notebook describing the plumage of the bird and distinguishing features I picked up on: 'Juv/1stwinter bird. Partially completed wing moult with most of scaps and some of upper mantle moulted. Classis SBD teritals with black centres and golden brown barring similar to rest of juvenile wing coverts. Obvious supercillium on grey head with obviously darker car. Bill seemed broad based with yellowish fade towards base. Barring subtle but obvious on breast and flanks. Yellowy-green legs that must be short on tarsus as bird seemed very squat, even when alert. Feeding with Snipe, Lapwing and BHGulls and appeared larger and stockier than Snipe and was only slightly smaller than Lapwing.' 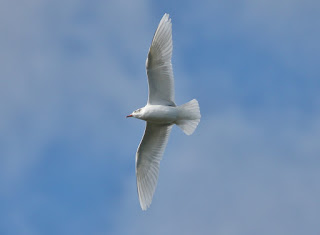 2 Med Gulls flew low overhead whilst we were watching the Dowitcher.
After watching the Dowitcher, we made our way to Portland Bill with the hope of some migrants and some seawatching. We dipped a Red-backed Shrike and failed to see any Balearic Shearwaters on our seawatch, but were amazed by a feeding flock of 40+ Mediterranean Gulls and 10-15 1st winter Yellow-legged Gulls offshore.
Heading back towards the north, we stopped off at Greylake and were rewarded with brief, but pleasing views of a Spotted Crake.
We were intending on getting to the Pallid Harrier in South Yorks. for dusk in time to see it roost, but were held up in traffic and it was going to be marginal, so we took our time and stayed the night in Doncaster ready for dawn. 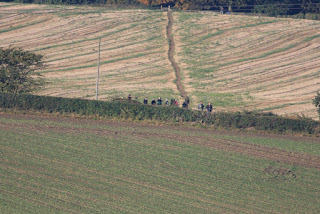 Arriving on-site before dawn, we joined an assembled group of 20 birders, inc. Alex Jones. It seemed to take an age for the sun to rise, but as 07.15, someone called the bird and I lifted my bins and picked up a white flash (rump) above the trees. I quickly picked the bird up in the scope and revealed a long winged, thin bodied and thin winged harrier with a thin 'hand'. The bird was an adult female and Pallid was proven by the really obvious dark secondaries and what looked like a pale 'flash' along the median coverts. The underwing wasn't seen for very long, so I can't give an in depth description, but they certainly appeared dark on the secondaries as the base of he wings, near the auxillaries seemed dark, lacking any barring.
The bird was seen for 15-20 seconds as it flew off to feed out on the fields, and what turned to be a departure from the site for ever! We were very lucky

Similarly, the Dowitcher disappeared the following day too, so we were able to see both birds on their last days! Two really great birds and lifers and a really enjoyable weekend. Thanks to Chris for the invite, doing the driving and stumping up for the hotel!
Posted by Zac Hinchcliffe at 21:30:00 No comments: