I went sea watching today off Starr gate, which was quite productive due to the strong Westerlies. After this sea watch I went to Knott End and Glasson as my Grandma offered to meet me at Starr Gate after I had Finished.

got the train from Preston at 08.18 and arrived at Sqires gate at 08.45 and bagan Sea Watching shortly after. It was slow to begin with but it soon picked up with 3 Man Shearwater heading south, I ended up with at least 16 at the end of the watch. during the course of the Sea Watch I picked up on 6 Arctic Skua, including 2 pale phase bird in pursuite of a Sandwich Tern, I think the large number of Arctic Skua was due to the large number of Tern going through. I also had a juv Skua sp which i thought could have been a Pom, but on arrival back home I realised this was way to early for Juvinille Pomarine Skuas. I finally got my first Lifer for the day - a Storm Petrel. A single bird flew south, slowly struggling in the wind.
Also:
2 Great Crested grebe flew North, Male Red Breasted Merganser, 5 Gannet, 26 Common Scoter, 15 Knot south.

A Bit late for the Gulls at High tide, but there were still some Sandwich Terns about in a group including an Adult Arctic Tern, which was nice.

Condor Pool was empty due to work going on by the viewing platform, but Glasson itself held the returning Adult Yellow Legged Gull. (2nd for Lancashire this week!)
Posted by Zac Hinchcliffe at 15:43:00 1 comment: 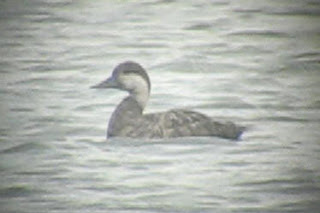 Above and Below - Female Common Scoter - Main Pool, Brockholes Quarry 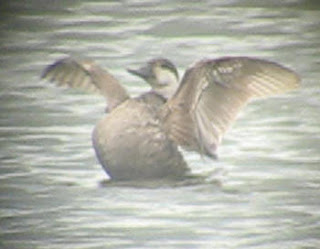 Another decent personal find this year and my second Scoter. A Female suprised me as I was making a WeBs Count onsite to help with the onsite bird report later in the year. I suddenly noticed a bird that was not the Mallard I had counted it to be, no, It was a Female Common Scoter - the 5th Site record, but 26th individual(due to the Flock of 22 on 6th August 2006)
Apart from the two records I have found this year, the others have all been on No1, but both of mine have come from Main pool, which I can see why at the moment due to the Main Pool being as deep as an Ocean...well it could be for all we know, as there are virtually no islands, unlike this time last year when main pool had the odd little puddle!
Posted by Zac Hinchcliffe at 09:29:00 No comments: 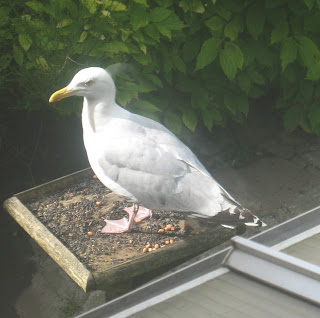 Above - 3rd Summer Herring Gull
Not your usual Bird Table Visitor! ( sorry about the Poor quality, taken through Window at and angle)
Posted by Zac Hinchcliffe at 16:27:00 No comments:

A nice adult frequented the Marsh from Nel's Hide, but was stupidly elusive (so no photo's :( ) and for the first 45 minutes i was able to see a stretched out wing and a Black Bill! The Bird was sharing a small grassy island with 6 Redshank and a Lapwing, which when flew seemed to wake the Pec up and it finally began to show, for two seconds! until it showed on and off behind a tussock.

Also on site I managed to catch a glimpse of a fly by adult Yellow Legged Gull which could be the bird i've been missing at the Quarry recently.

A nice adult Black Tailed Godwit dropped in to the Marsh and was a nice specimen! 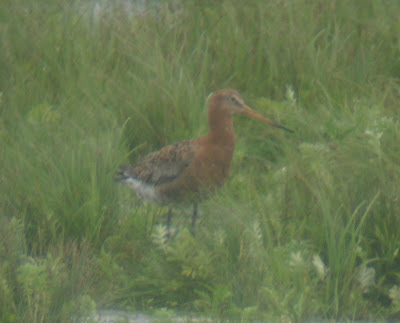 I may as well introduce my Local patch as i will probably write quite a few posts for the site over the time I am on Blog spot.Brockholes Quarry is a former Sand Quarry that has now, in early 2007, been taken over By Lancashire Wildlife Trust. This is their largest site due to the fact that they also own the two surrounding woodlands, Boilton and Red Scar. 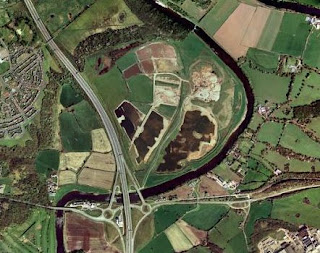 The Quarry is located in the North West of England, and is 2 miles east of Preston, Lancashire. Also the Quarry can be seen on the East of the M6 Motorway at j32.
There are two main pits at Brockholes - main pool, and No1. There is also No2, No3 and several other small pits.
Main pool
The main pool can be seen on the Picture above and is the pool to the south of the access road through the quarry. This has many islands and is the usual roosting site for the Spring Whimbrel Roosts, that now makes the site a national importance as the current site record is 401 birds.
Due to high water levels in Spring 2007 the Whimbrel appeared to prefer the island and bank of No1. There is a reed bed bordering the Main pool that holds Reed and Sedge Warbler, Reed Bunting, Little Grebe, Coot and Moorhen.
No1
No1 is the Largest pit on site and can attract interesting birds, including: Black, Arctic and Common Tern, (these are virtually annual, and in September 2007 a unprecedented flock of 43 Black Tern hawked over the Pit) Most records of Med Gull ,ittle Gull and Kittiwakes come from No1 too. No1 used to be split into 2 but the was made into the larger pit it is now. This probably is the reason for the increase in Common Scoter records, and the large migratory flock of 22! Plus the annual records of Osprey, with at least 6 in early 2007
Brockholes Quarry is an important site for Breeding Little Ringed Plover.

So that's the Quarry that I frequent regularly!

Thanks for reading
Posted by Zac Hinchcliffe at 18:46:00 No comments:

In mid-July, you would expect to be saying a break from the Sun, but this Summer is Terrible!
A Mid Morning traul around the quarry produced 5 Black Swan - Obviously Escapes but still nice!
But by far the Star Bird of the day was a Juv Common Redstart that I found. This was the second ever Record for the site and only my 3rd individual...ever! The bird was annoyingly elusive so no Photo's were obtained
Posted by Zac Hinchcliffe at 14:24:00 No comments: 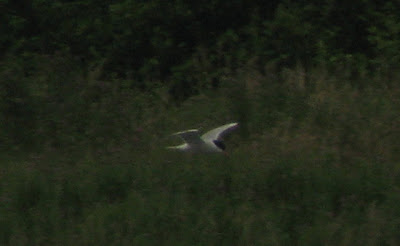 Common Tern - (Poor Record Shot) Brockholes Quarry
What looked like promising weahter for the quarry at this time of year, turned out to be ok rather than good.


also an almost Yellow Legged Gull turned out to be a Herring.

I missed a flyover greenshank by a minute or two as well.


Lets hope the water levels go down, and the wader numbers go up! 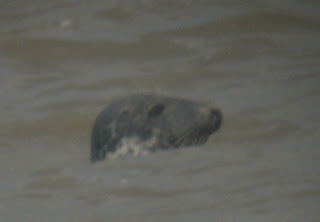 7 Manx Shearwater, 2 Arctic Skua (2 Dark Morph), 2 Little Egret flew north, 41 Whimbrel Flew South, 2 Common Scoter, 34 Gannet, 5 Common Tern, 2 Arctic Tern, 56 Sandwich Tern, male Red Breasted Merganser, 11 Cormorant.
[5 Grey Seal, Bottlenose Dolphin*]
* Bottlenose Dolphin was a real Surprise, as I thought that I would have been lucky to get Harbour Porpoise, but obviously not! Lets hope this sort of thing Continues...Minke Whale Next time...???
Red Breasted Merganser was new for the year (amazingly!) The Manxies were new to lancashire for me, and the Skuas were a nice sightings, as 2007 is a new year for them, for me anyway.
Posted by Zac Hinchcliffe at 14:17:00 No comments: