Mid-Day High tide at Starr Gate and an 0400 start! 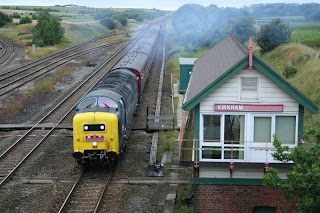 Ok..not exactly an American Wader or indeed a bird for that matter! 55022 is one of 22 'Deltics', with only 6 production engines left within Preservation. Deltics are close to the heart of my family, with a lot of us living or being born in Doncaster where these 3300bhp beasts stormed through at 100mph.

There has only been a single Deltic to ever go to Blackpool and that was back in 1980! so this trip from Blackpool-Cardiff wasn't worth missing...a video is on youtube if you type in 'Blackpool 55022'

I havn't exactly been posting on here as much as I was but then again since my last post I have only been out twice and that was to a pretty uneventful Brockholes Quarry, however Hobby and Green Sandpiper aren't bad birds! (I was unable to twitch the Juvy Redstart and Black Necked Grebe...)

considering that the weather has been persistently raining during this Westerly Sector, I felt that Starr Gate needed to be watched!