It's not really a hard hitting blog post, but I thought it was quite a milestone so worth the share!

I've really enjoyed blogging over the years and really enjoy looking back over my trip reports.

I've blogged about my birding, twitching, ringing, herpetology, entemology and even a post about mountain boarding!
I've blogged from within the UK and further afield - France, Spain, Sweden, Arctic Norway and the Big Apple.

Thank you all for reading! 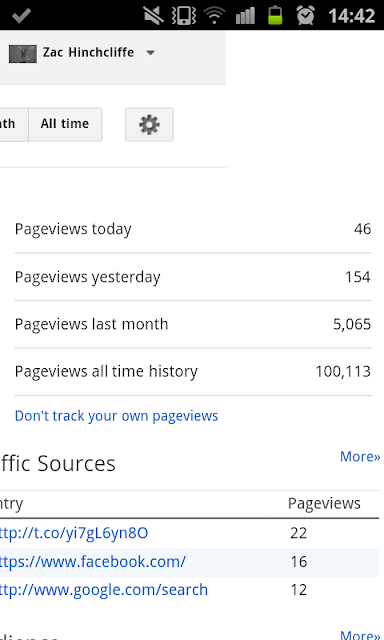 For anyone who isn't partial to a spot of Laridae, I'm afraid this blog post puts the 'Gull' in Gullfest! Hopefully by the end of this blogpost though, you will realise that gulls are amazing. For anyone reading this who IS partial to a bit of 'gullduggery', then sit back, relax, and have a butchers at some White-wingers, argys, hybrids and a currently unidentified Common Gull! 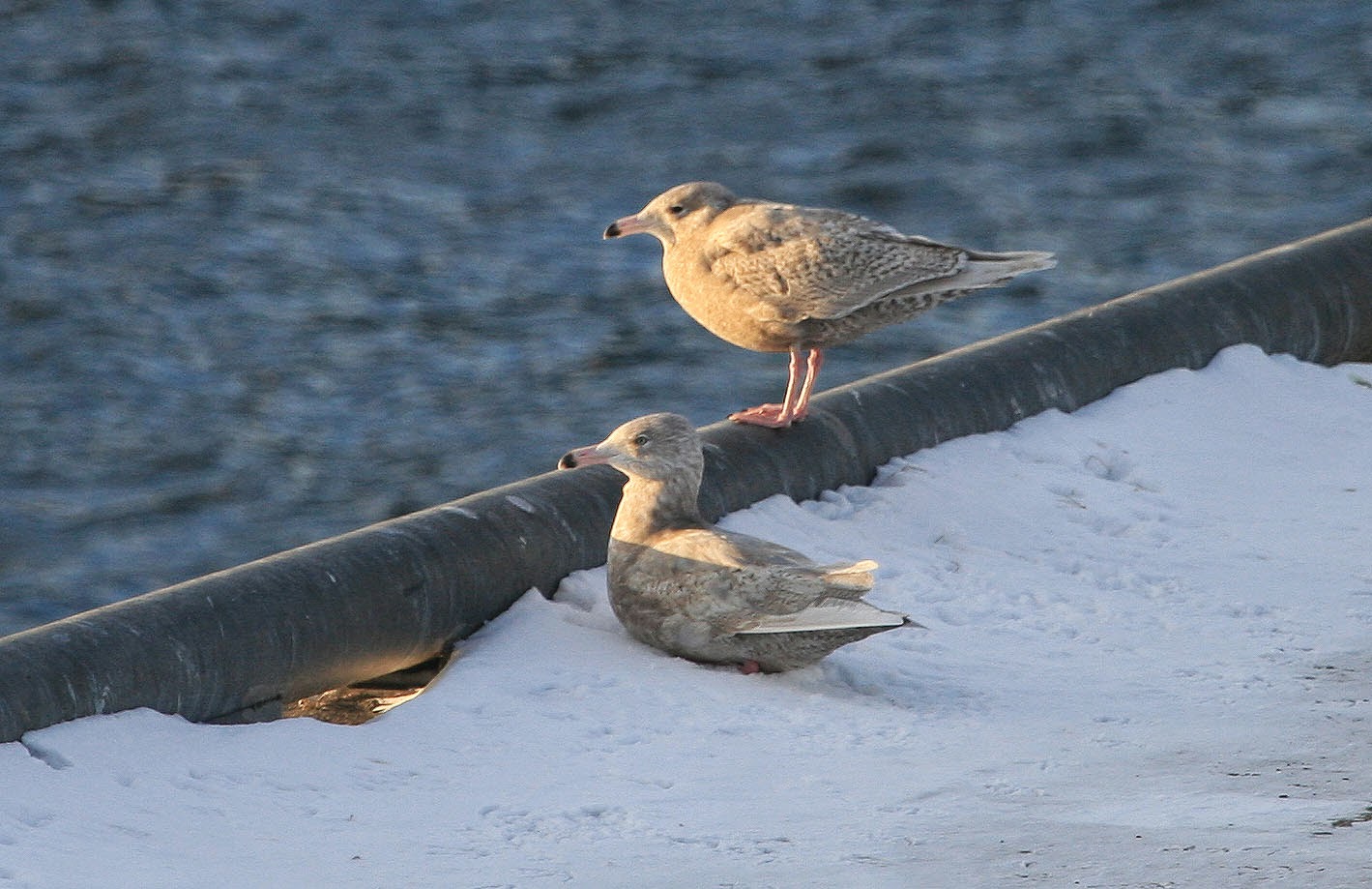 To ease you all in, I thought I'd start with some white-wingers. Even the larophobic birders out there can appreciate a white-winger! This year Gullfest was brought back a week or so to take into consideration the leaving dates of the wintering Glaucous Gulls. With a surprisingly mild February though, there weren't as many as you'd imagine in the Arctic Circle. I would suggest we had about 40-50 birds (mainly 1st winter birds) during the trip. They were great to see in good numbers and it was even nicer to see birds other than 1st winters (as that it all I personally have ever encountered). We were treated to about 5 adults (possibly more) and a 2nd winter. 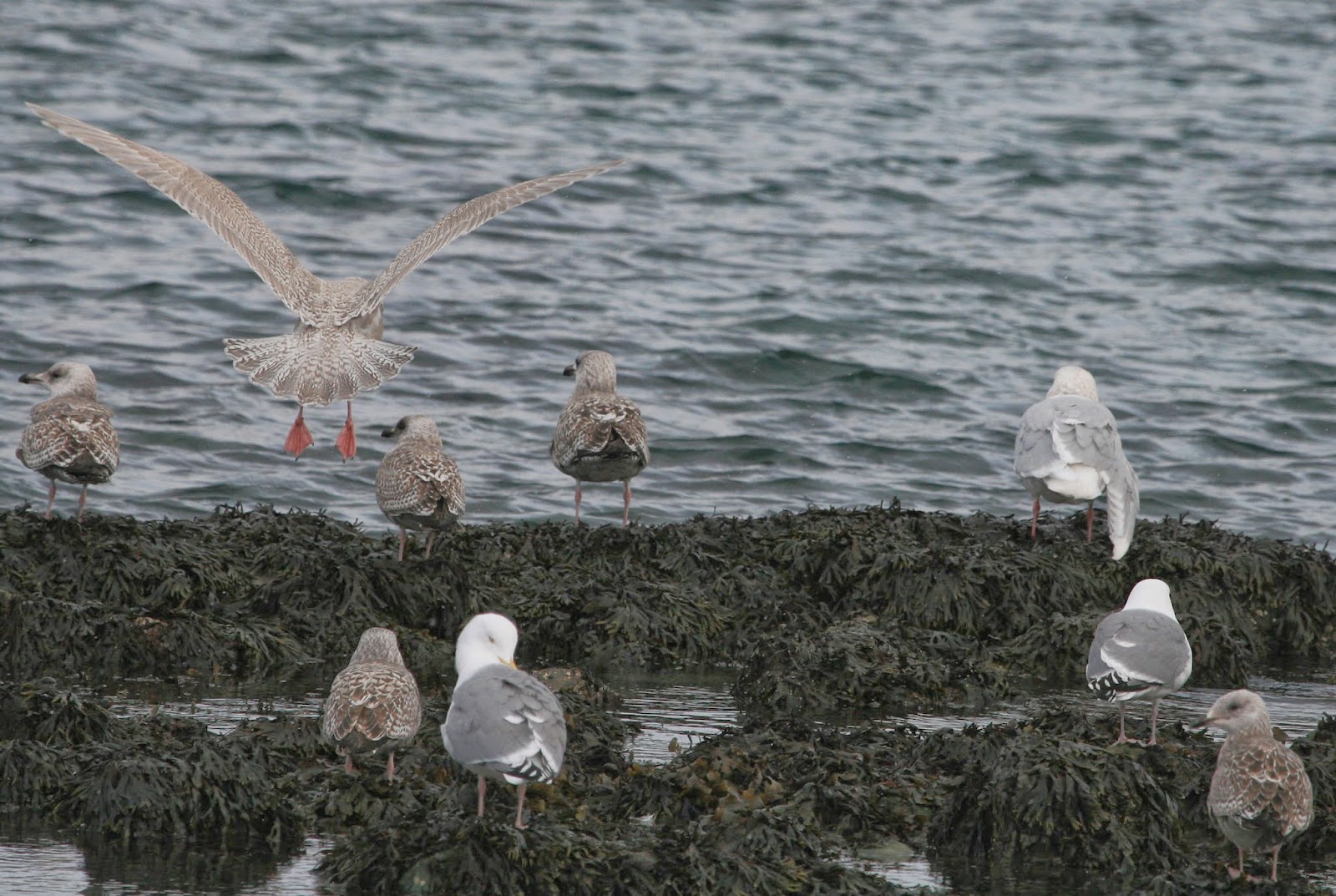 Compared to the recent influx of presumed American Glaucous Gulls in the UK & Ireland, it was nice to see some proper gingery 1st winters. Those legs are incredible too! So pink, they almost look Pacific! 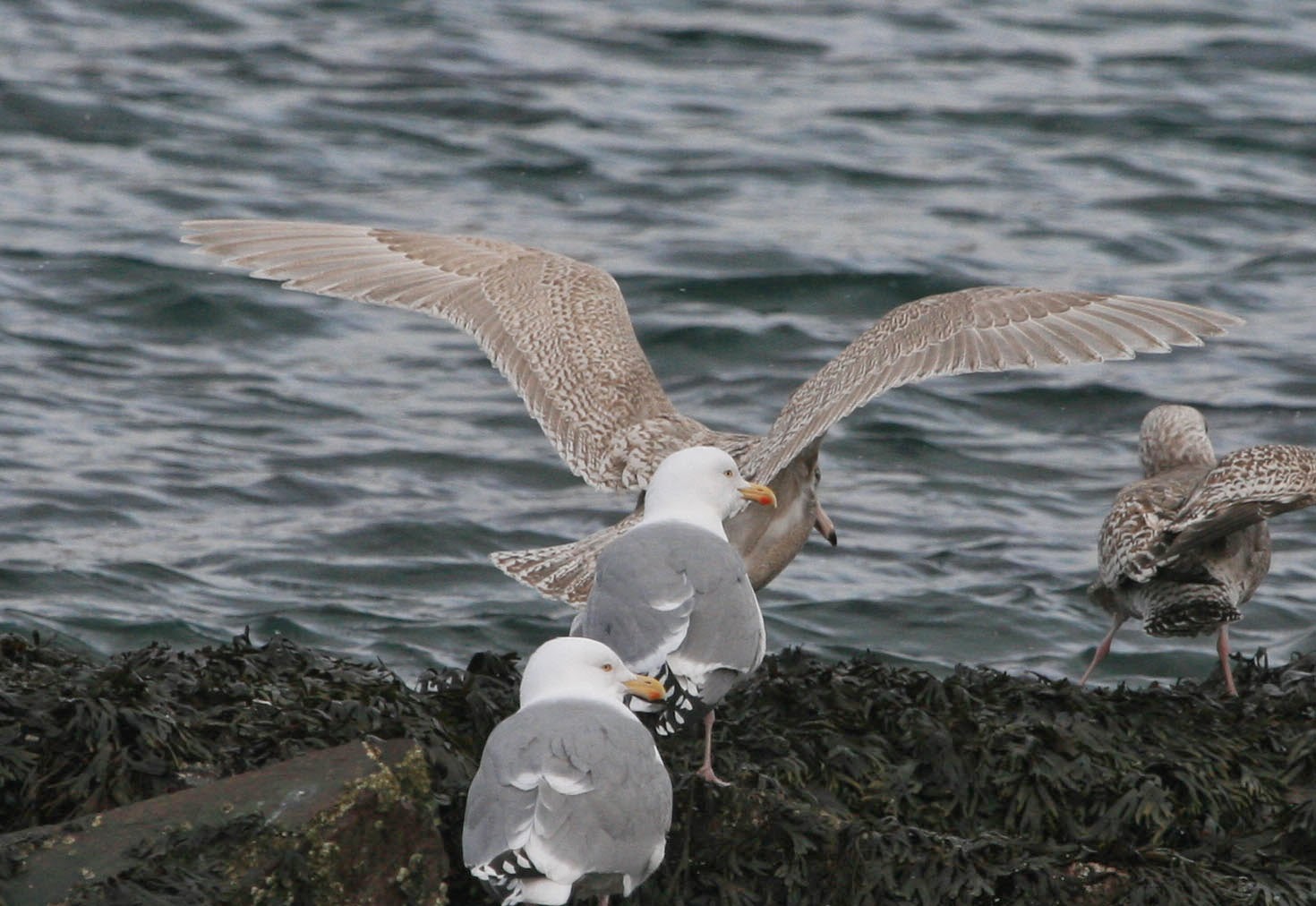 (above) This is quite an interesting bird. It was certainly on the darker end of the scale for Glaucous. With such an obvious tail band and what appears to be dark pigmentation to the tips and outerwebs of the outer primaries. Could this is a pale hybrid Glaucous x Herring or is it within range of dark Glaucous Gull? I guess it could be either, but I think it's 'just' a dark Glaucous Gull. 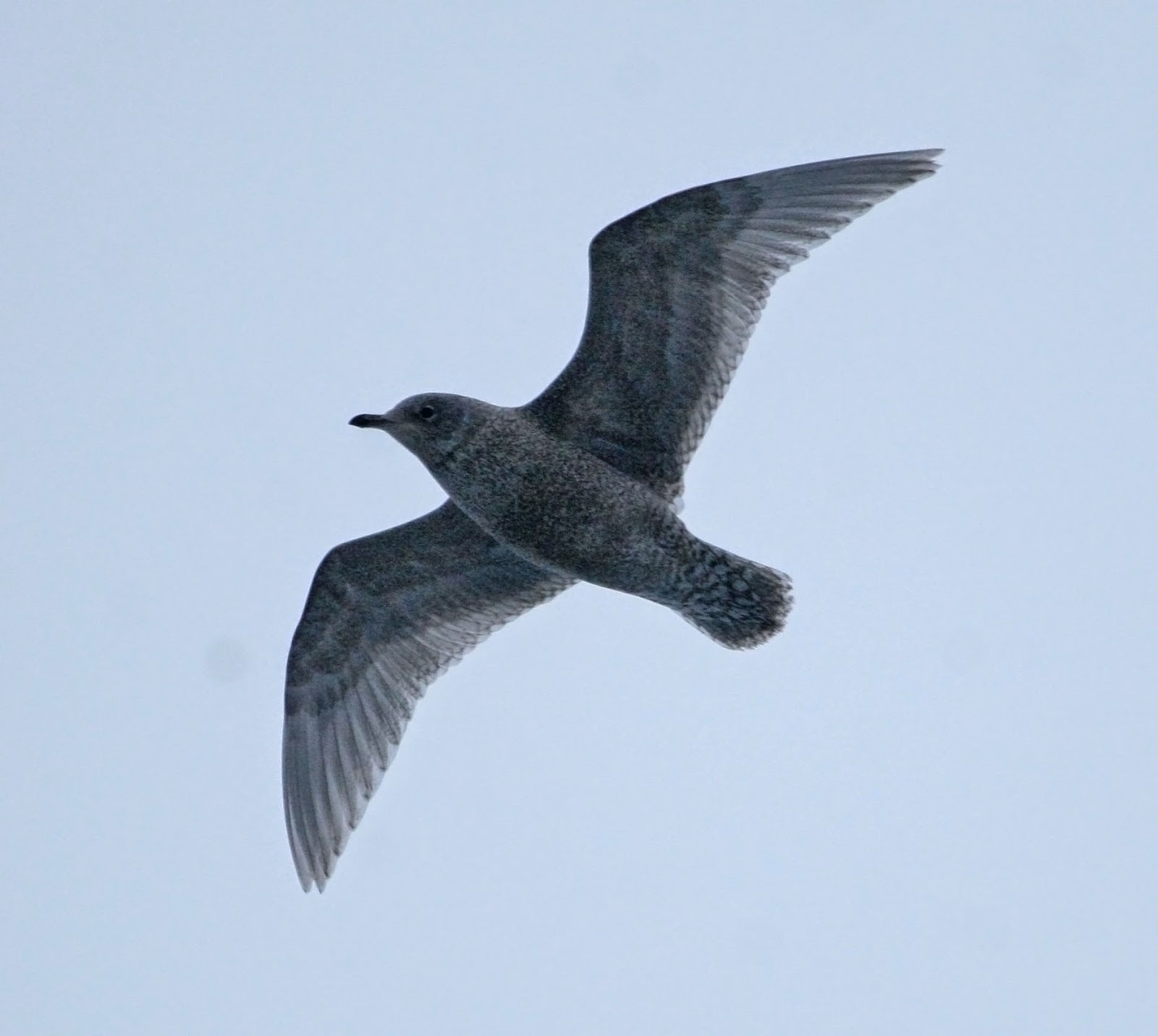 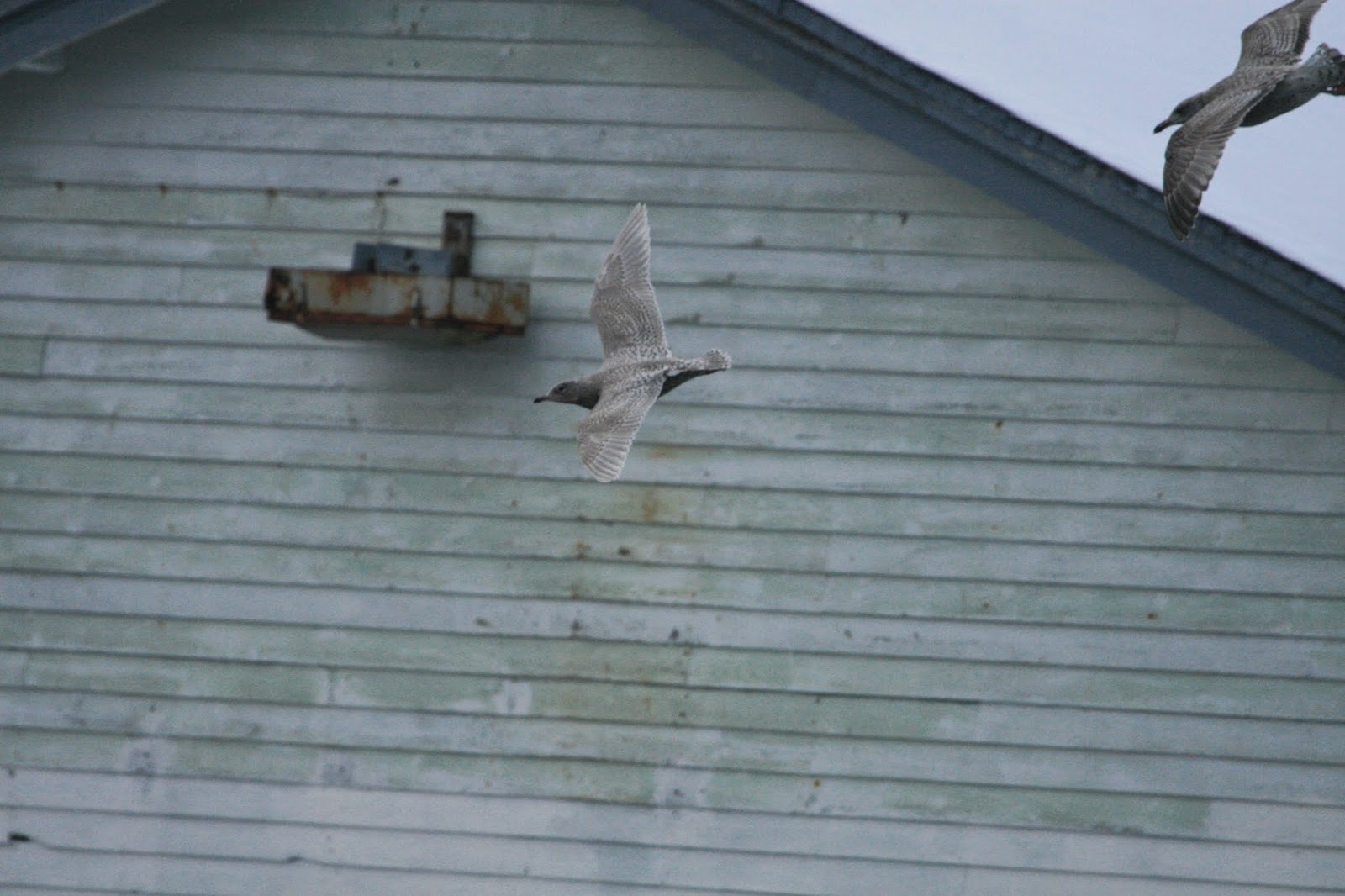 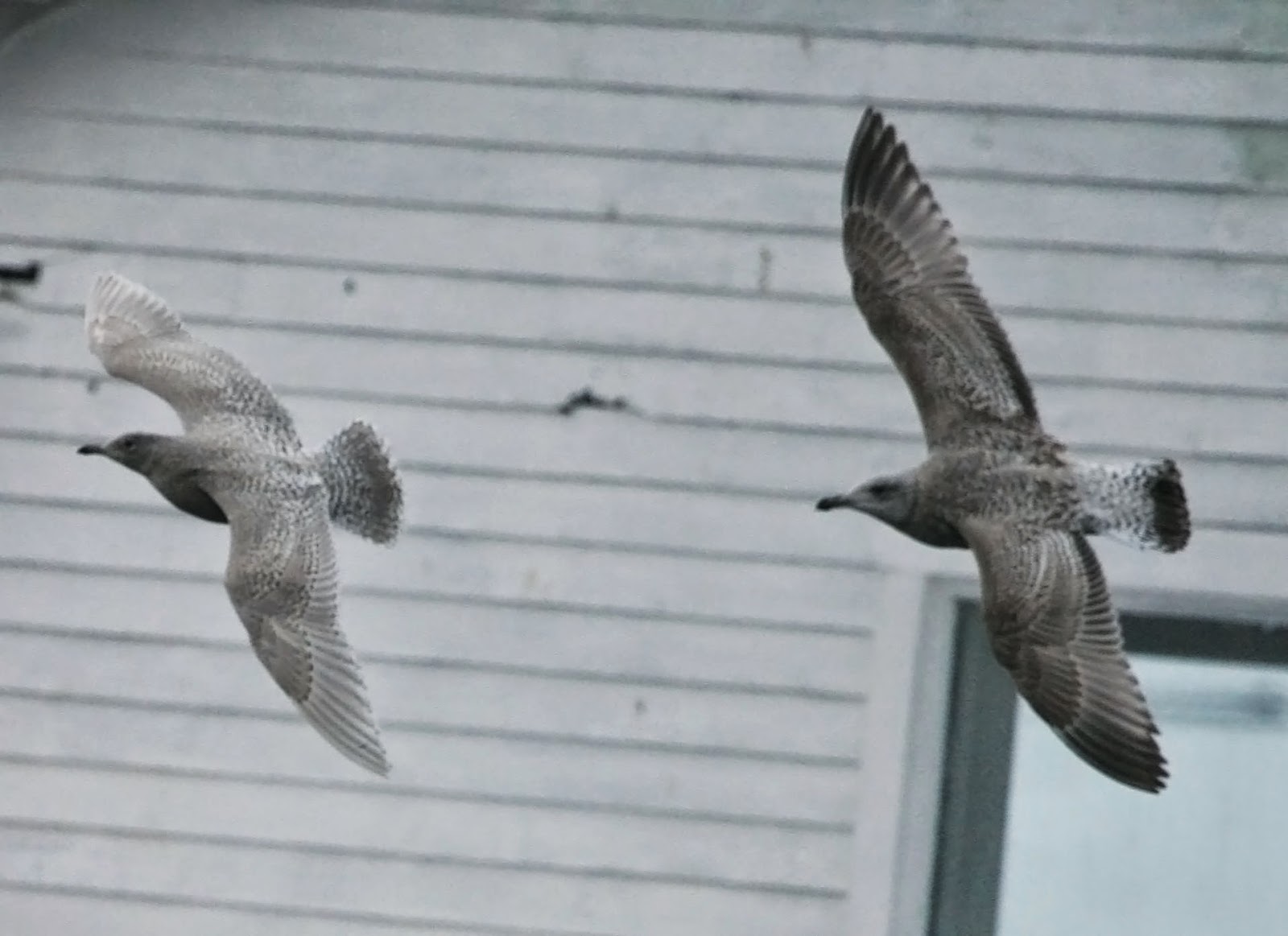 Next in line is this rather dark Iceland Gull. Originally identified as a Kumlien's Gull due to dark primaries, however after close scrutiny, the general consensus is that it is a dark Iceland Gull. Being such a dark bird, I think you'd expect the primaries, secondaries and tail bar to be much darker. On some photos too, the inner primaries show up to be darker than the outer primaries, which should be the other way around in Kumlien's. It also has a very 'Common Gull-like face' which should be more Herring-like in Kumlien's and Thayer's. The bill however was pretty dark for Iceland, but I guess that could fit the overall dark appearence anyway. An interesting bird and a nice bird to see with Glaucous Gulls too! At the same site, eagle-eyed Anders also managed to pick up a second 1st winter bird flight north, very high above the harbour. So high, that you actually couldn't see it with the naked eye against the clouds! Amazing! 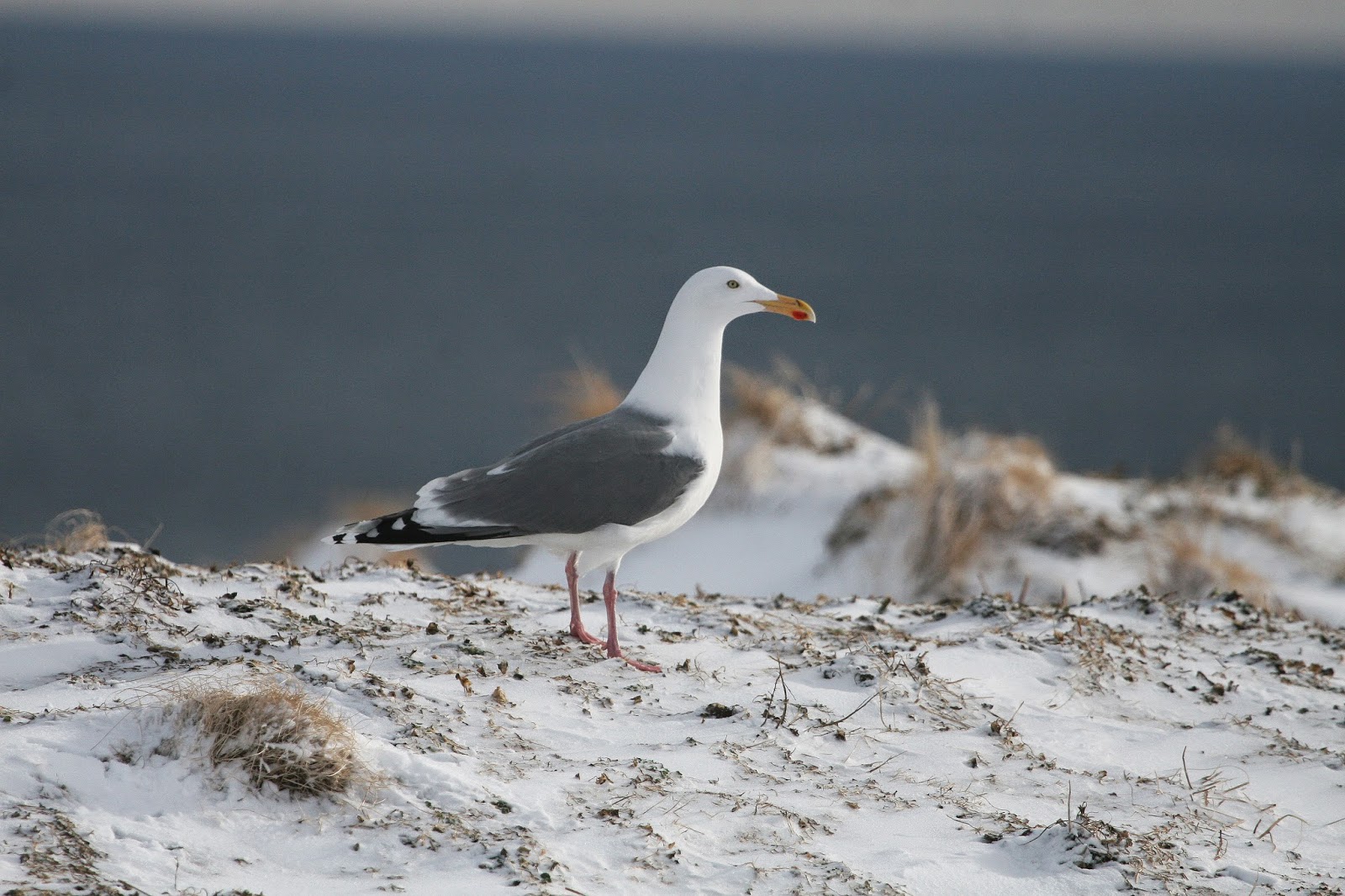 Ok, so now we're into the nitty gritty and the shady corner of the birding world....Herring Gull races! However, I will forgive you for looking at the above bird and being surprised to hear it's a Herring Gull! Look how dark it is! It's remarkable how exaggerated the darker mantle of argentatus is on a snowy background. Fantastic birds!

I can imagine that you've so far been thinking that Gullfest doesn't exactly seem all that 'gully'. I seem to recall hearing that the colony on Hornøya is the largest Herring Gull colony in the world....is that gully enough for you? 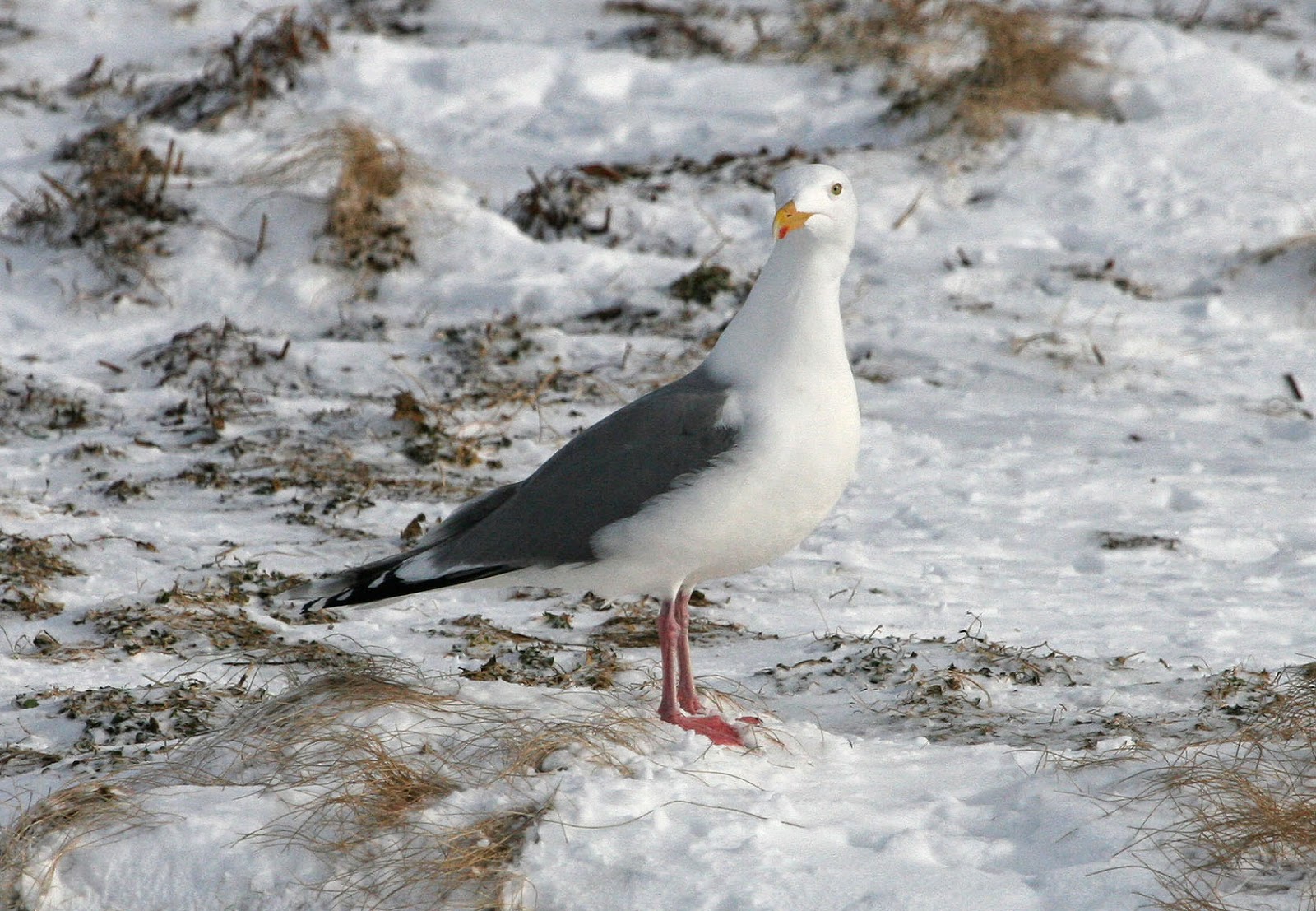 Not only are they dark mantled, check out those pink legs! You wouldn't be too wrong to think that these could have been taken in Japan as these legs look almost like Vega Gull! 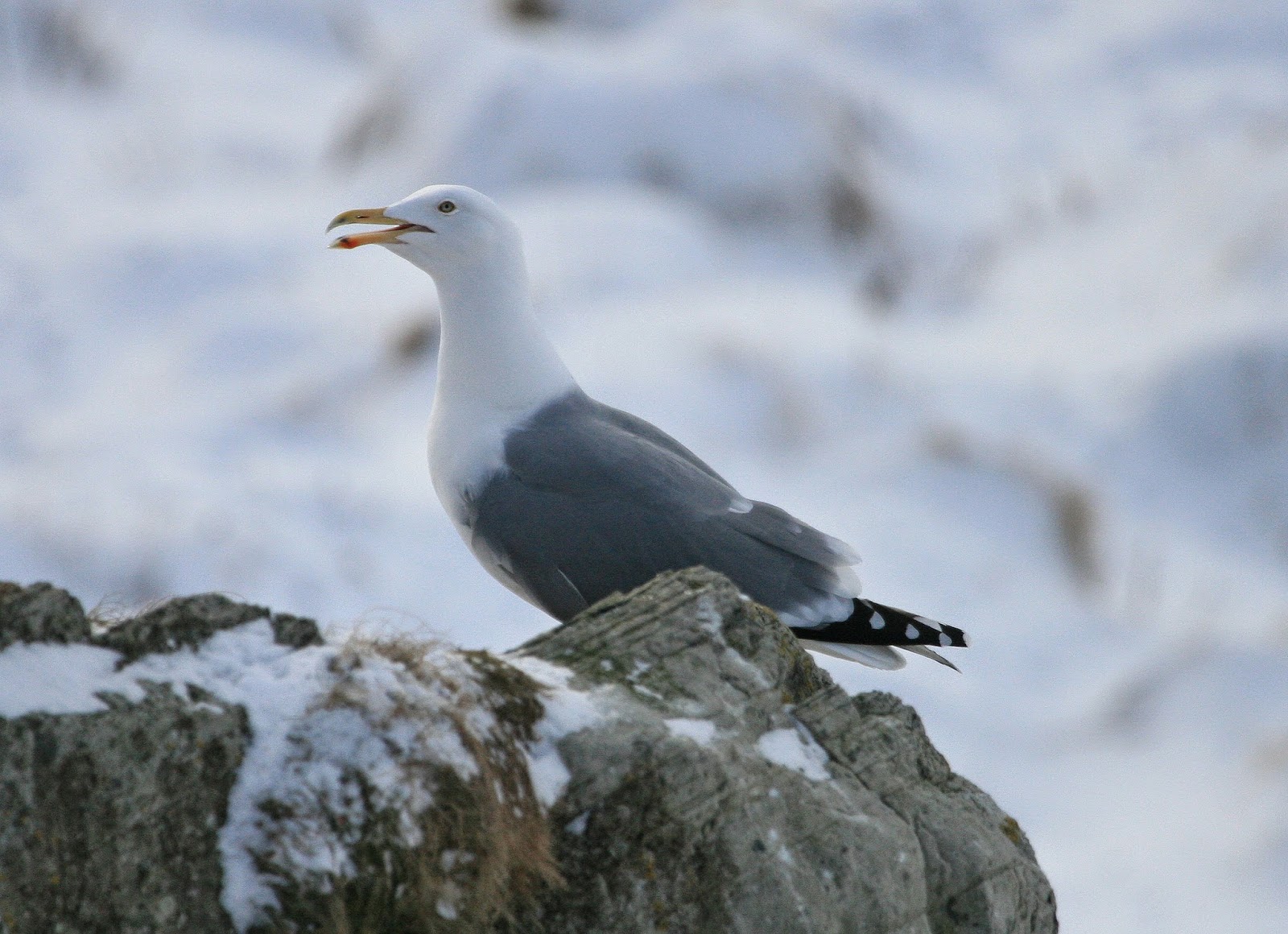 The wing tips appeared to be very variable, particularly with the white spotting. Some seemingly indifferent to argenteus Herrings showing quite small white primary tips. Others showed a lot of white and combined with fully white tips to primary ten and reasonably large mirror in primary 9, they looked very different to the birds I'm used to seeing in Bangor. 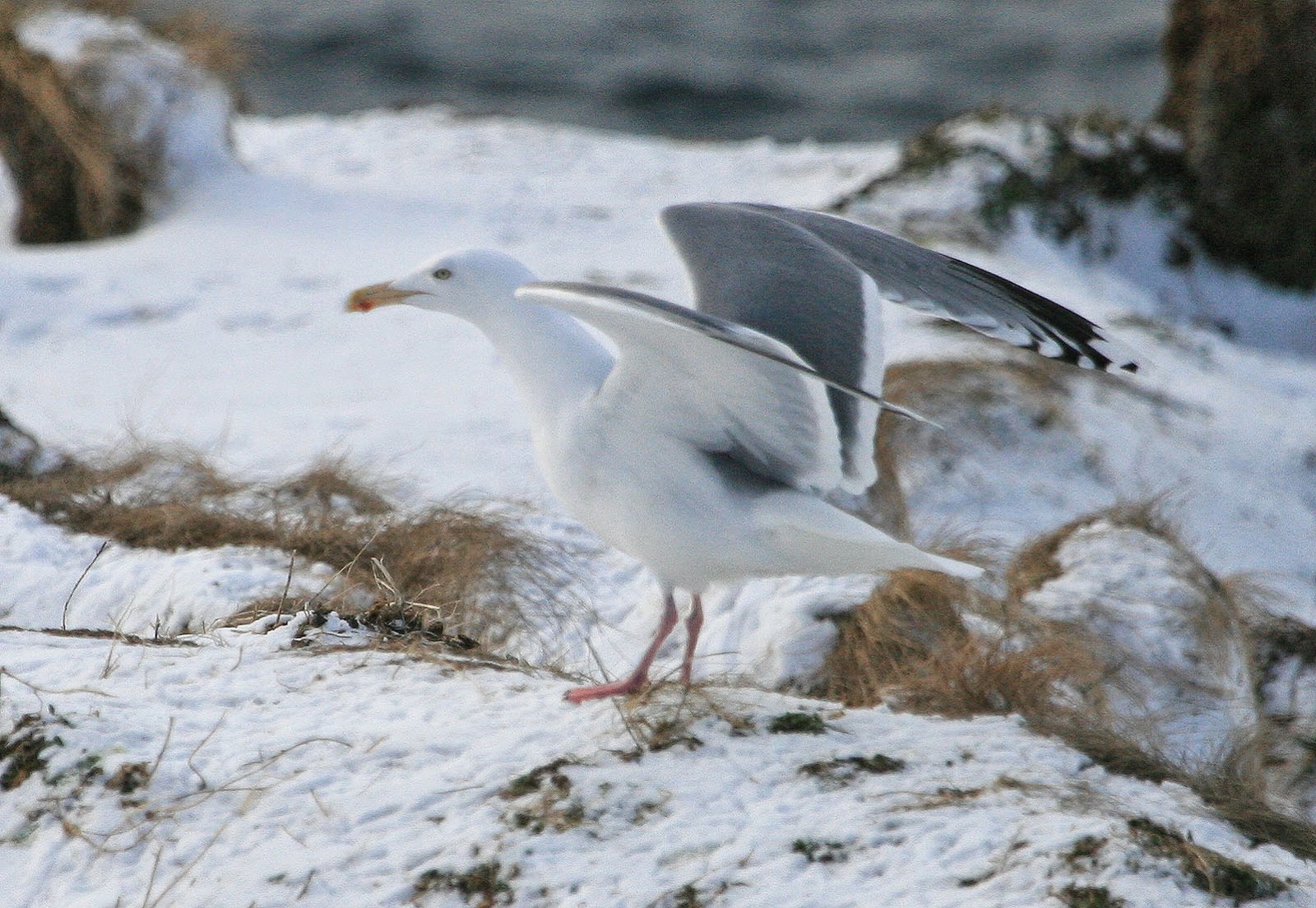 I am quite disappointed that the majority of my open wing shots of adult argentatus Herrings were out of focus, as it would have been nice to get an idea of just how variable they can be. Obvious differences were the reduced black on the primaries as this was a characteristic feature compared to the variability of the white. The inner webs of most primaries seemed to lack a lot of black, which was diagnostic compared to 'ours' 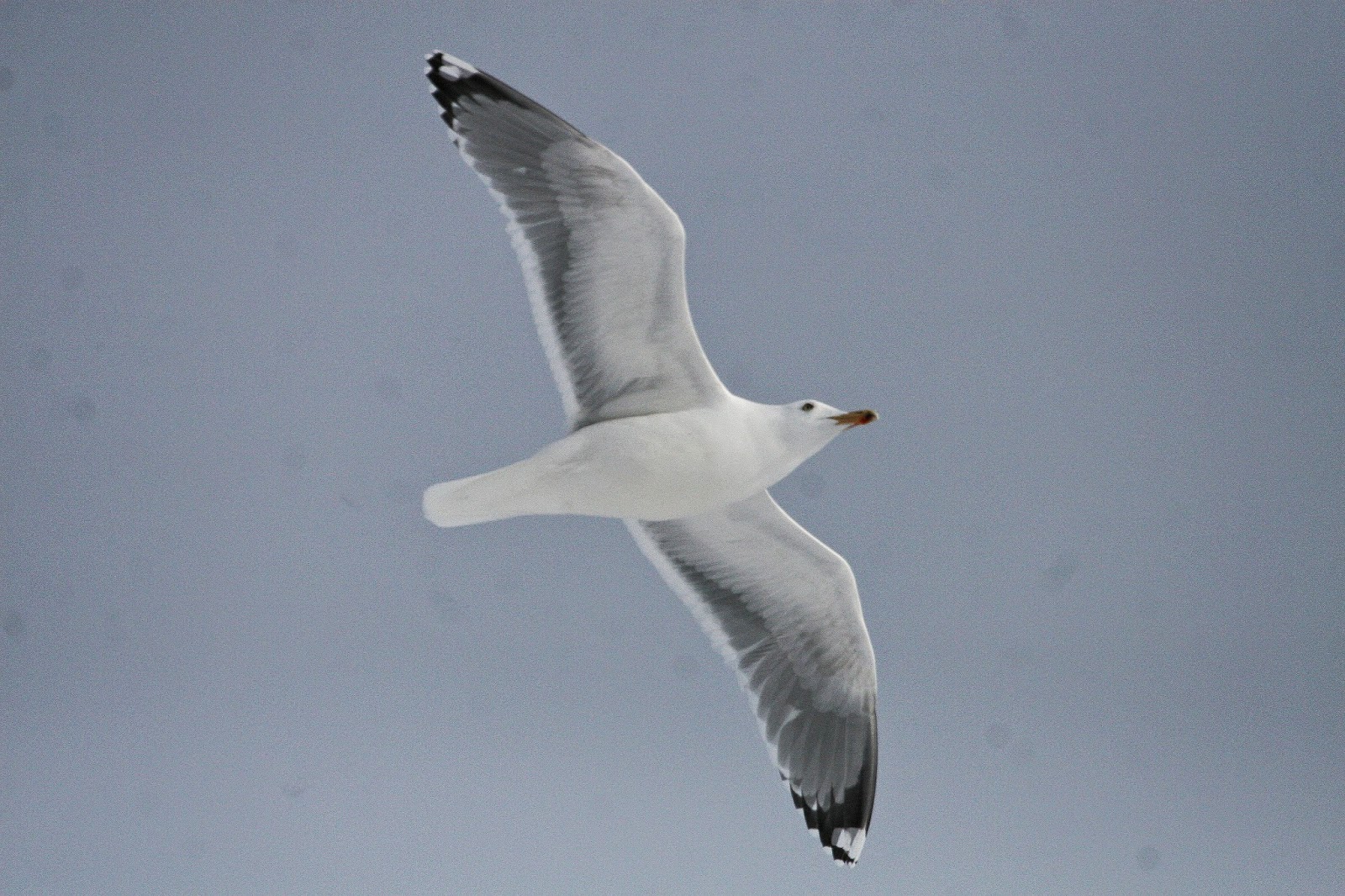 The increased size of the white mirrors is evident here. I would say though that, with the exception of the very dark mantles (check out how much the mantle bleeds through onto the underwing on the above bird!) some of the adults (and an awful lot of the juveniles) would probably slip under the radar for me...that probably says more about my lack of knowledge than the birds themselves! 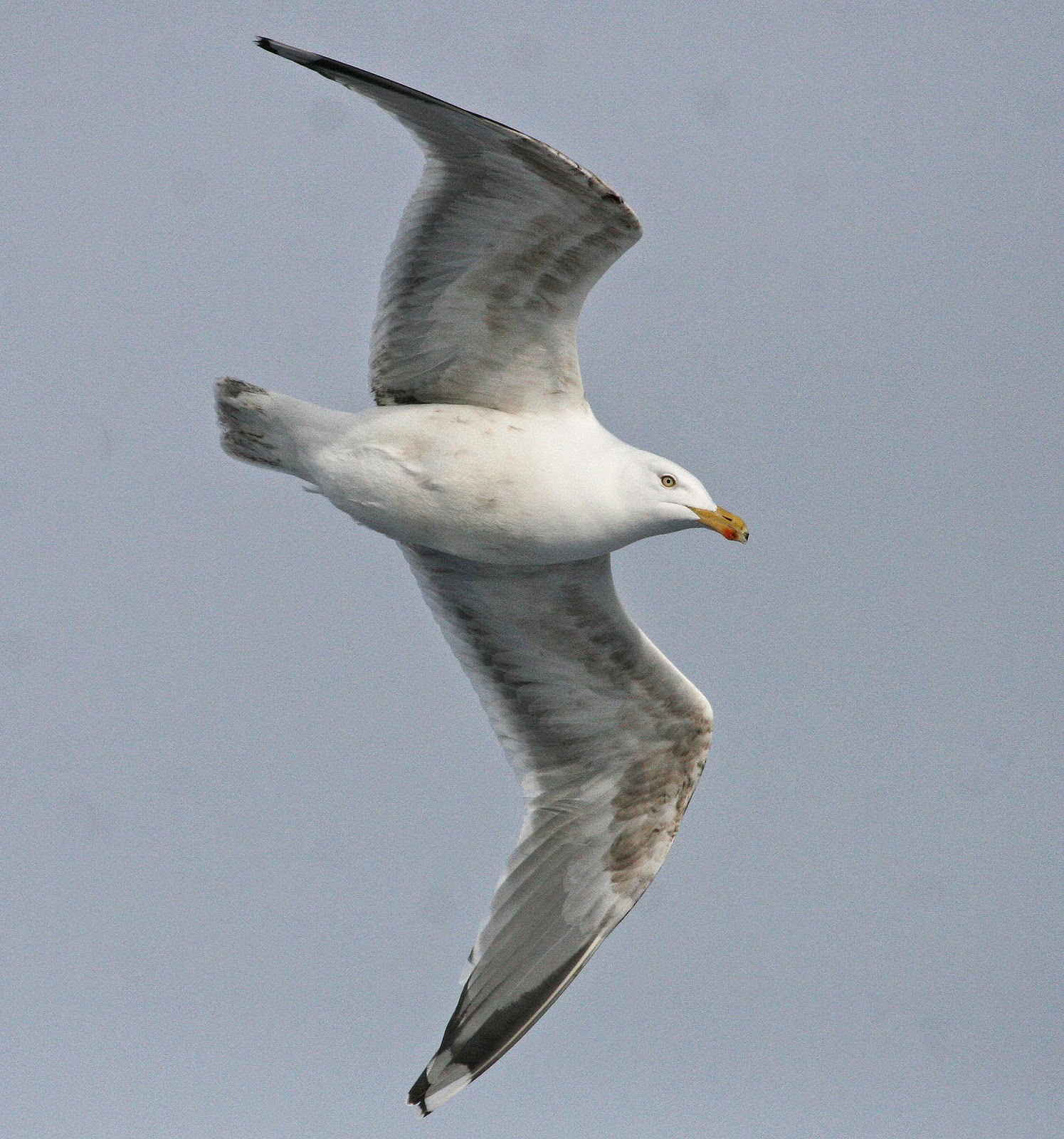 Structurally, these northern birds are real brutes. The above bird is so chucky billed and pot-bellied, looking almost like a GBBG. 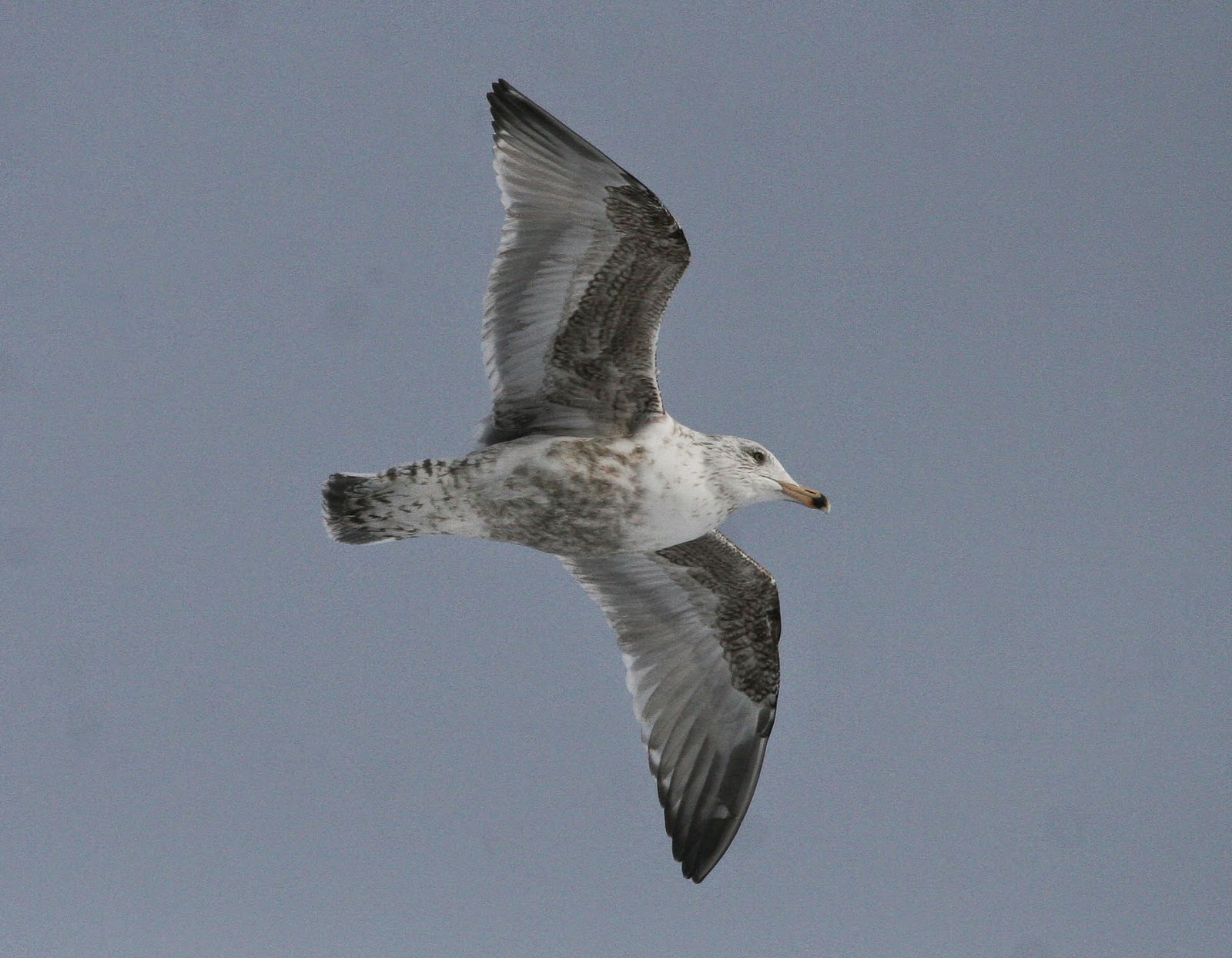 A feature that REALLY stood out was how pale the flight feathers are underneath being almost silvery. When they fly towards you, particularly if they have a bicoloured bill, they really look like dark Glaucous Gulls (see below) 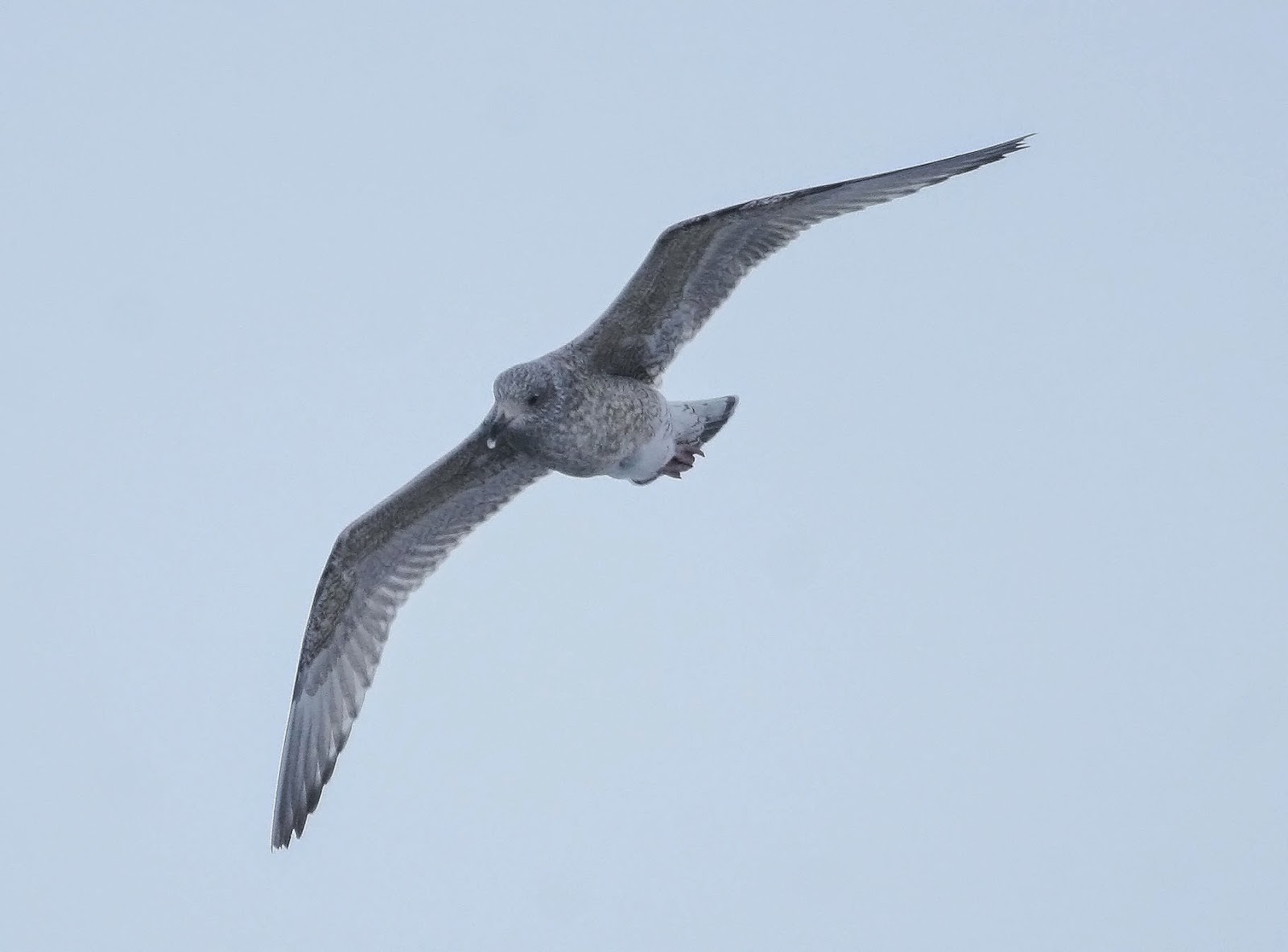 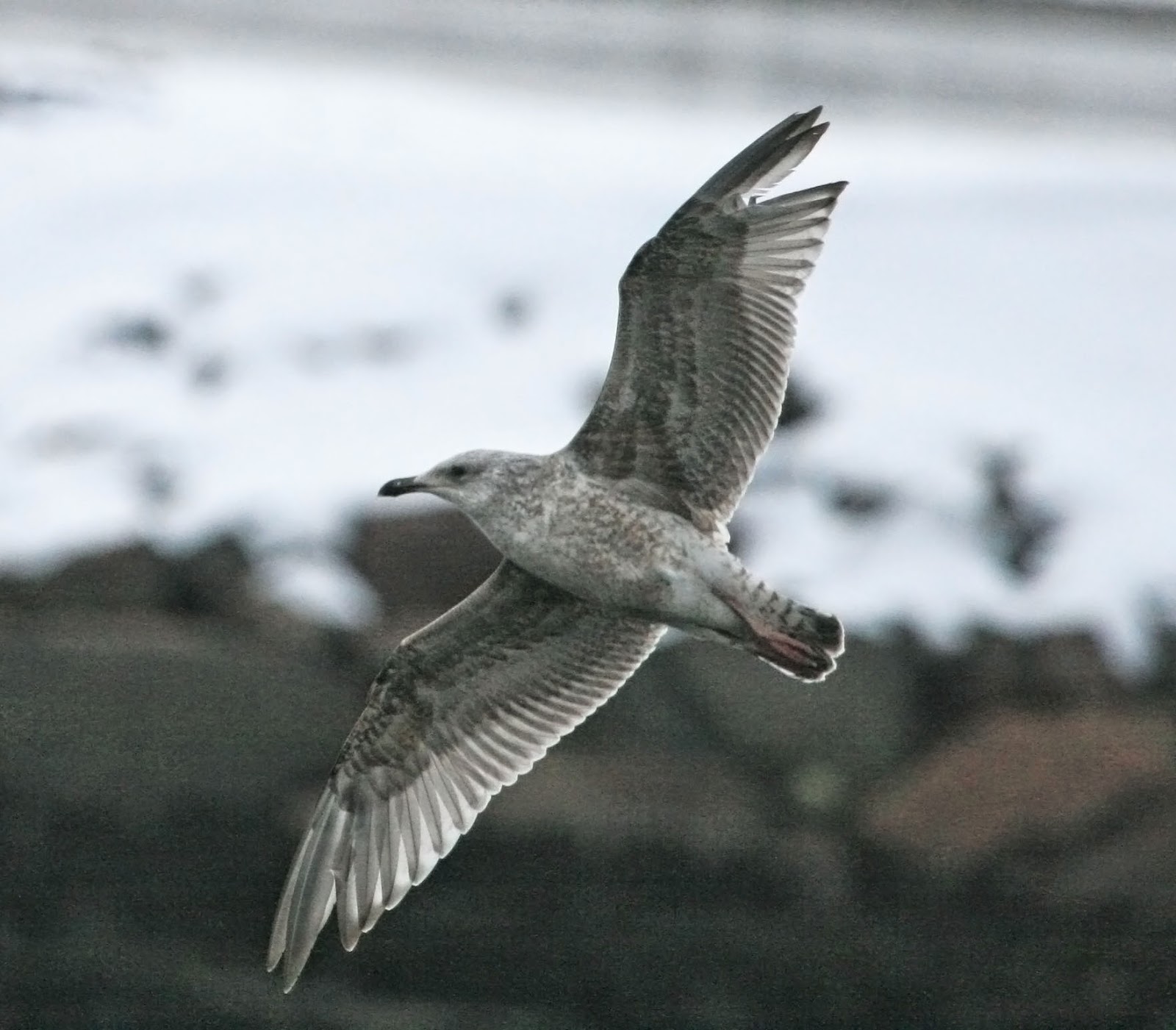 I couldn't really work it out with this bird, but is this in wing moult? It appears to be symmetrical on both wings, but the feathers don't seem to differ in age at all. Perhaps this is tardy moult from Juvenile-first winter? 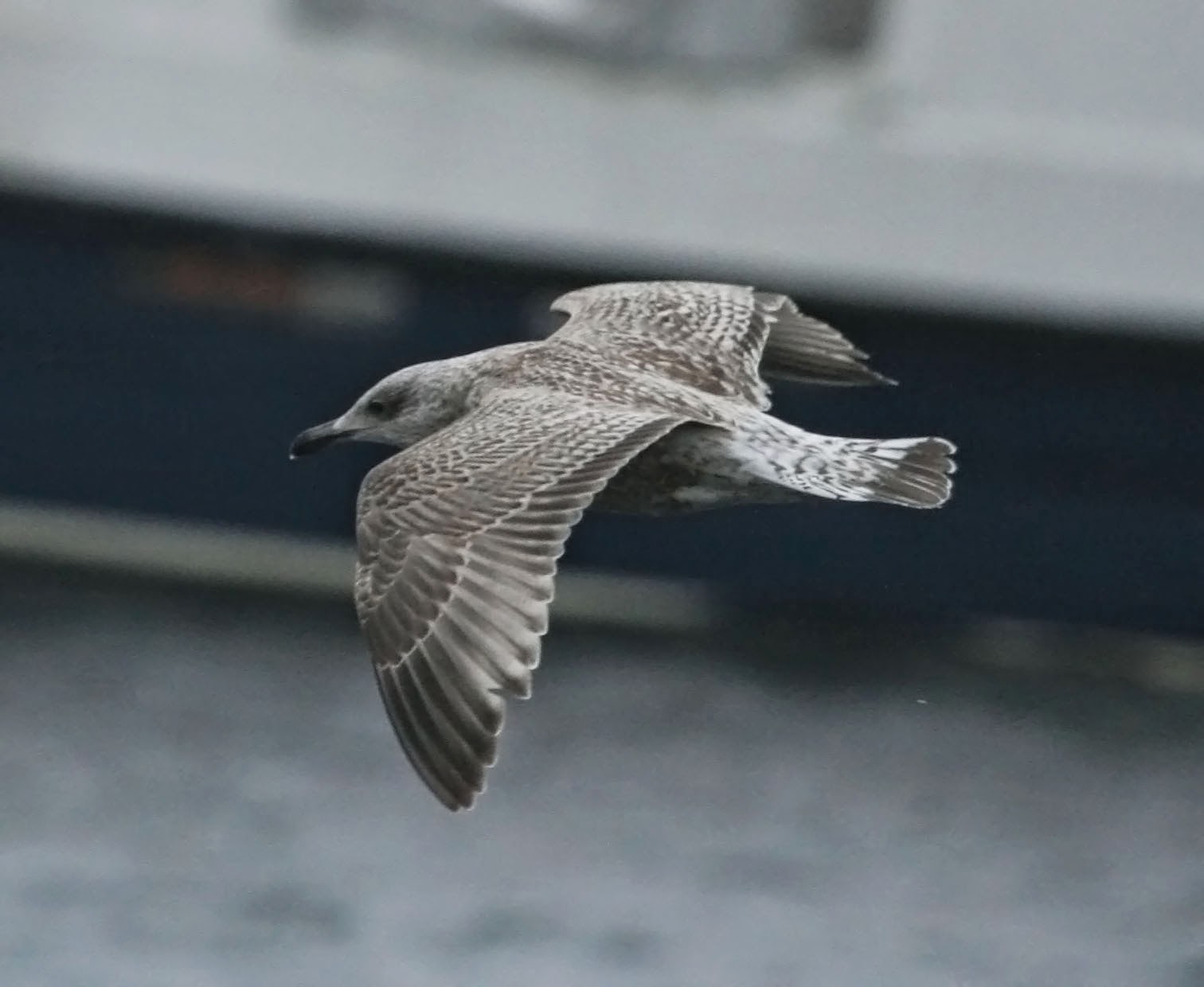 I am really out of my depth at the moment with 1st winter argentatus Herring Gulls. I'm not at all sure how to 'do them' if they're not enormous brutes of birds. On the upperwing, I can't see much in terms of different plumage (particularly now they've finished their moult to 1st winter plumage), but to me, the window in the inner primaries seems a tiny bit darker than the argenteus I'm currently seeing in North Wales? (I guess this could be due to lack of bleaching/wear?) 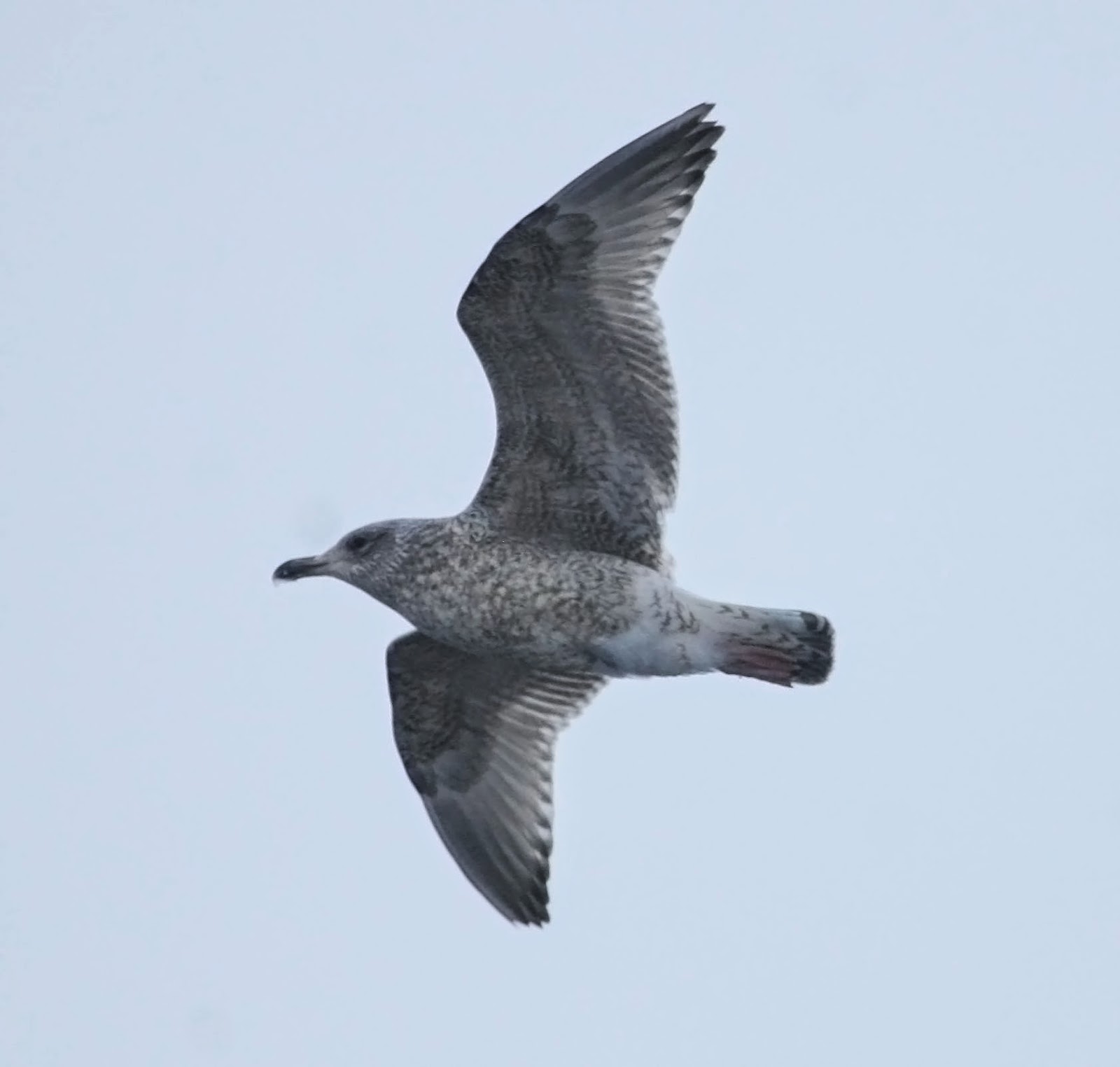 A feature that appeared on about 1/3rd of the 1st winters I properly looked at had a really cool feature that made them look as though their caudal projection had been dipped in white paint. It really stood out, especially on birds with silvery underwings. Whether or not this feature appears in argenteus, I can't comment (I really need to look at my local herrings more...) 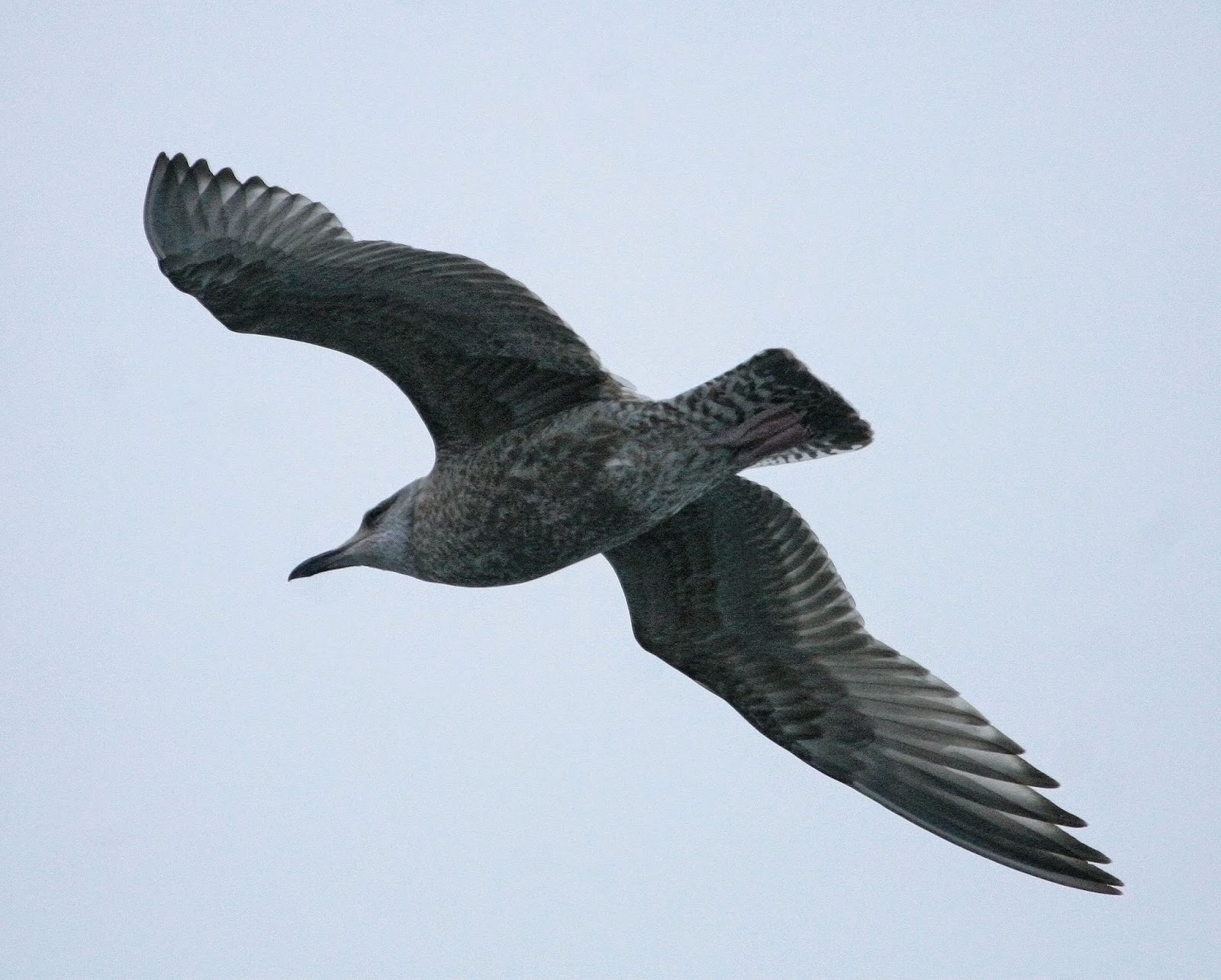 On the other hand, many birds were strikingly dark underneath with dark underwings (except for the flight feathers), dark belly, dark vent and little sign of the pale window in the inner primaries.

A couple of Head Scratchers...
A weird Common Gull... 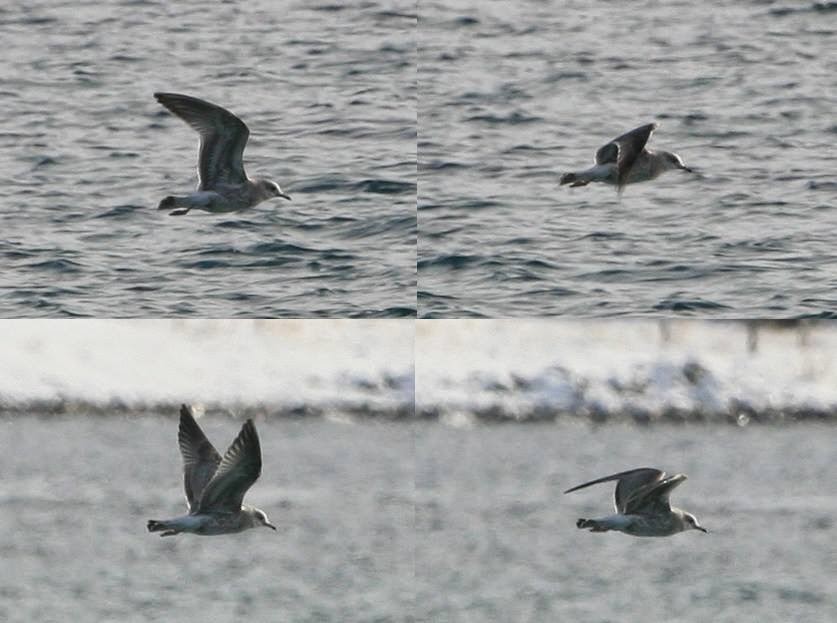 This gull really has left an obvious blank in my mind. On the first morning staying at the Birders Basecamp in Vadsø, I went out looking at the Eiders and a few 1st winter argentatus in the harbour. I picked up a distant gull that looked like a Common Gull, but particularly underneath, it looked like the dark argentatus that were hanging around...I couldn't place it. As it got closer, I was sure it was a Common Gull and in the end it was. It was just a strange bird. It was so dark underneath, but had an almost 'anti-hood' with a white head (looking like the inverse of a Med Gull etc), it had that similar white caudal projection as seen in Herrings as seen above, but also has about 20-30% streaking on the undertail and uppertail coverts. The underwing was very striking with thick bars running up and down and the tail band was obvious and broad. The auxilleries, weren't dark, but had broad dark fringes and the bill was strikingly long and coloured pink and black. My photos really do not do the bird any justice, so to be able to assign it a race, I'm not sure it is possible. Looking into the 3 possible races (it certainly wasn't bracyrhyncus), it becomes difficult. The pale auxilleries would probably rule out henei and kamtschatschensis earlier in the winter, but looking at photos, they can show pale auxilleries at this time of year, plus the underwings are very variable with some kamtschatschensis having dark lesser underwing coverts and others being pale. I think given the photos, it's probably left unassigned, unless you are reading this and thinking 'why can't this guy see that this is clearly kamtschatschensis?', then please speak up!!

Common Gulls at this time of year are not common in Varanger and usually only arrive back in mid-April. I wonder if this is from further afield and hopped a lift with the Pacific Eider? One can dream! 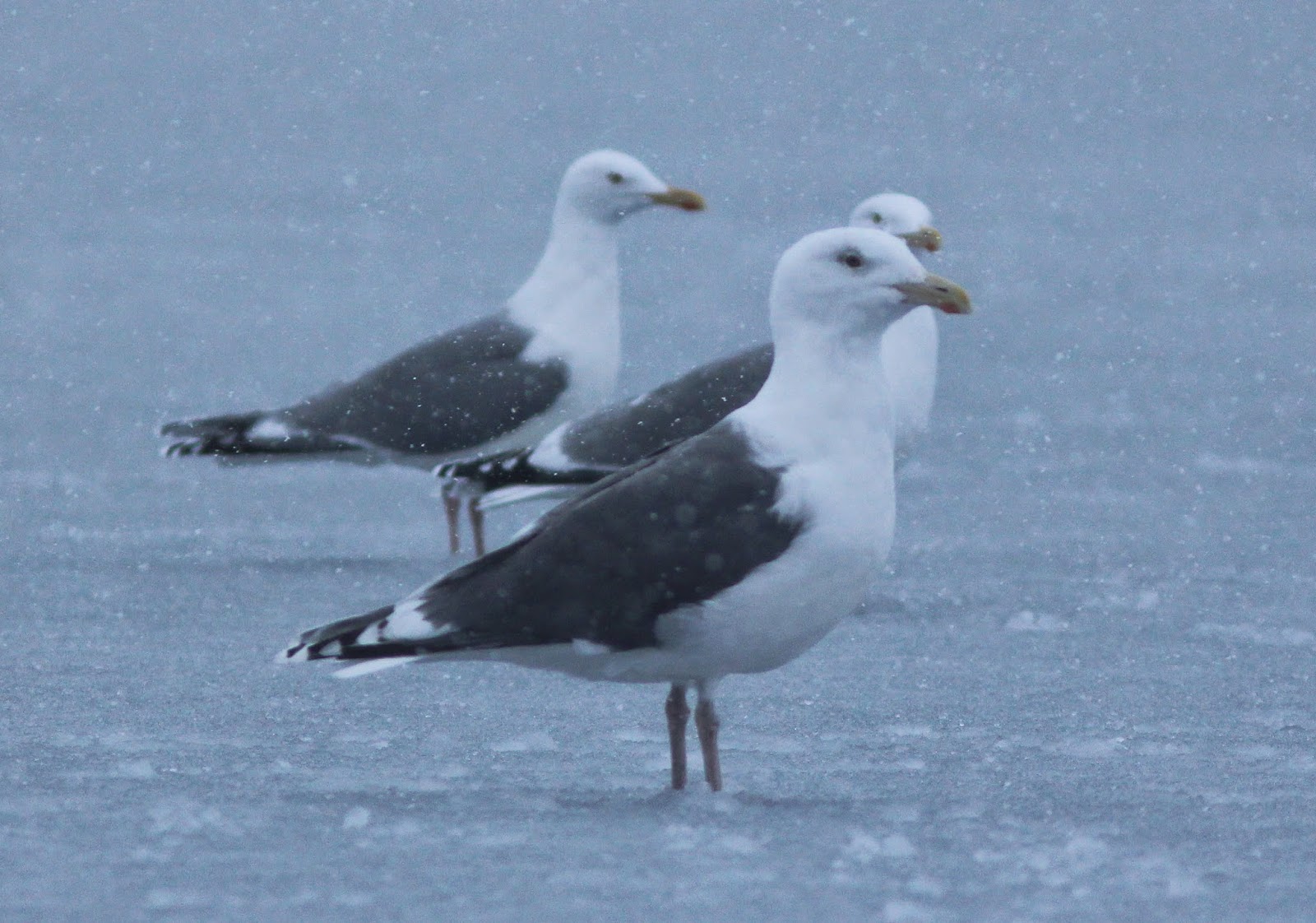 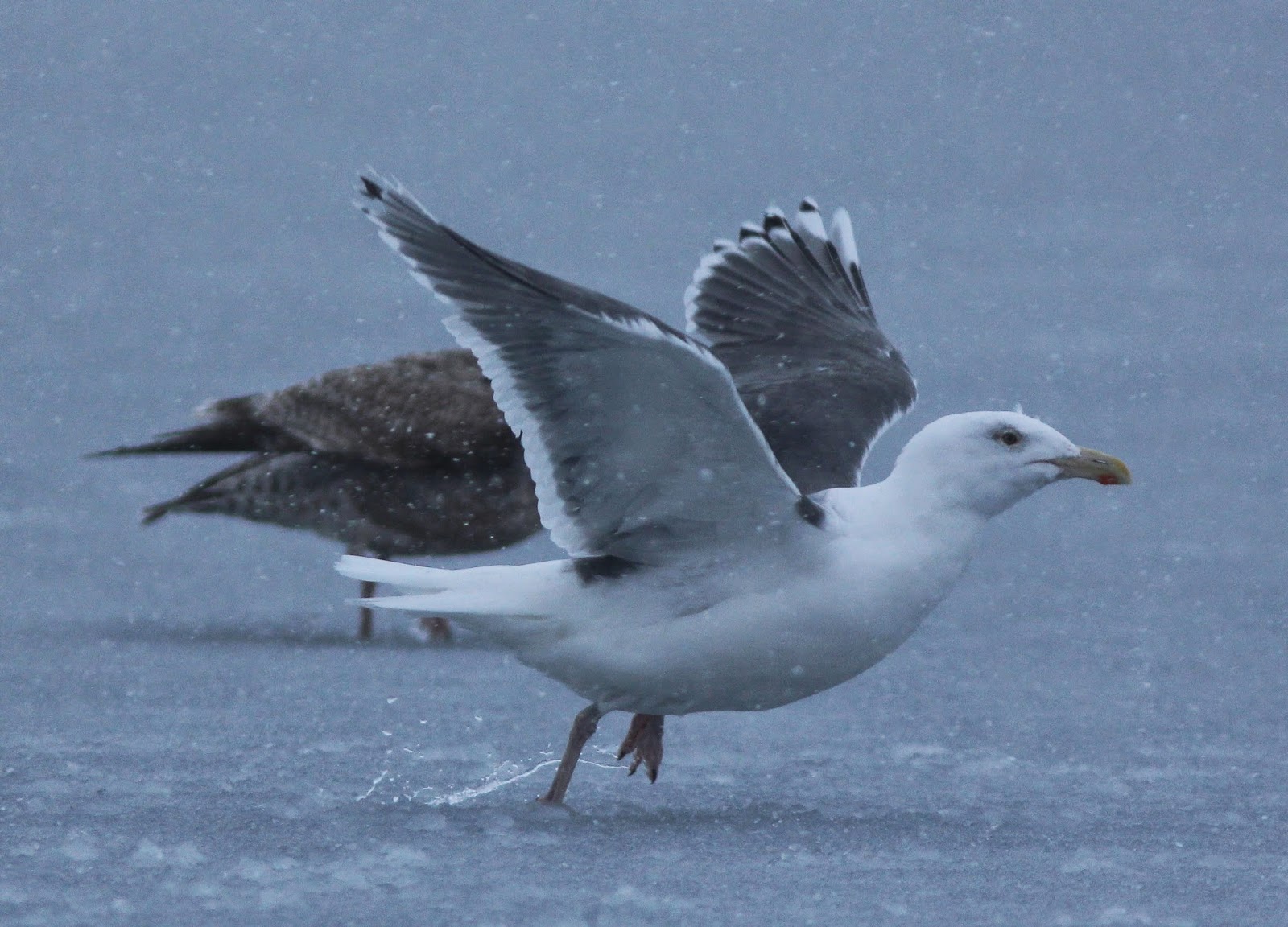 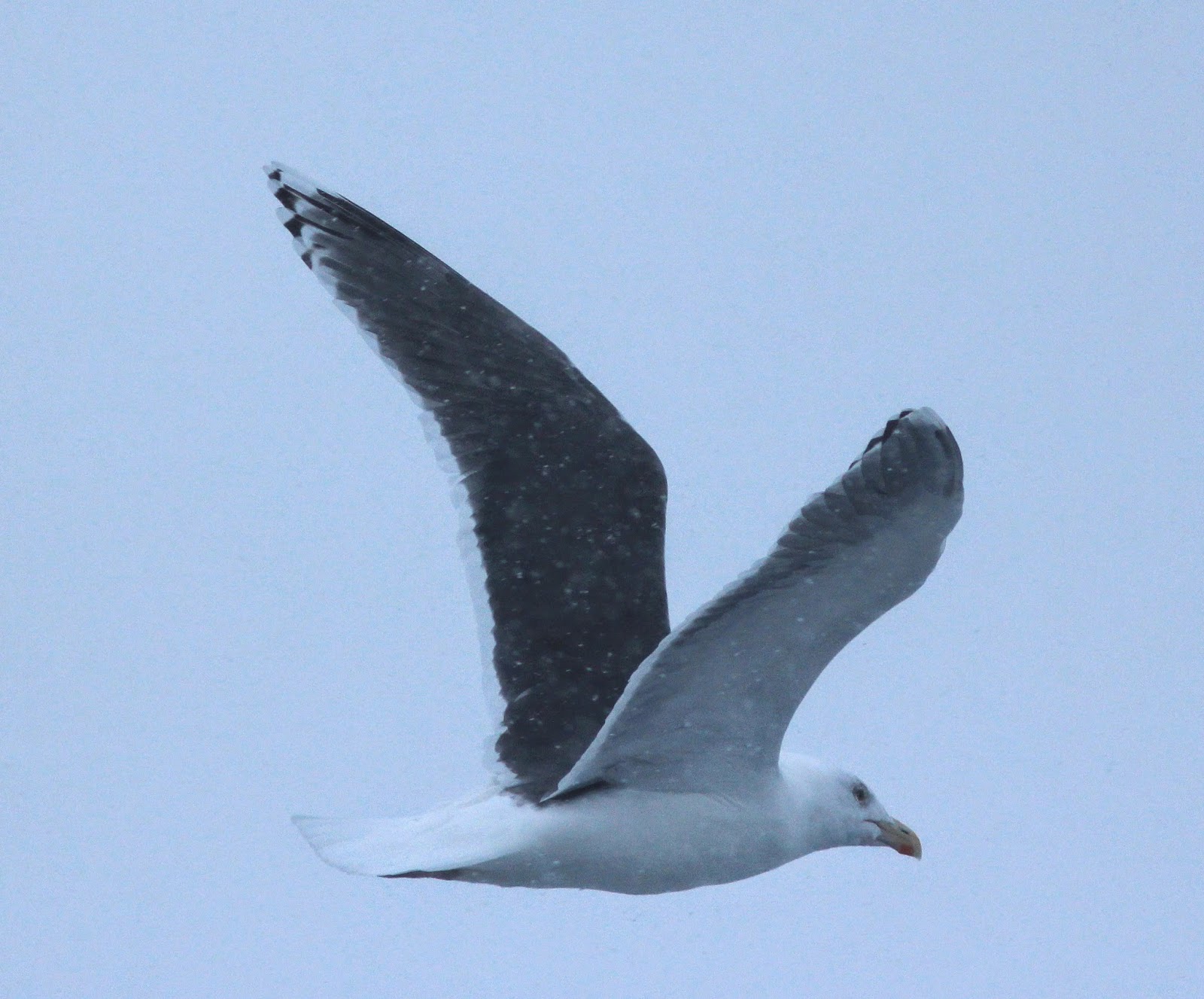 Photo - Anders Mæland
I will end this blog post with one of the most incredible mutant birds I've ever seen! This bird was seen in Båtsfjord harbour. Anders picked it up first and before seeing it in flight, thought it may be very very exciting indeed and shouted 'GET ON THAT GULL!!!!!'. It was an amazing bird! It superficially looked quite like a GBBG, but check out the top photo and how similar in tone it is to the argentatus Herring Gulls in the background. It had a ridiculous bulbous head and stubby bill which made it look really mean. Hoever, the white tertial cresent wasn't very large (despite a broad white trailing edge to the wing) and the lefs were less pink than the argentatus Herrings. When it took flight, the 'string of pearls' was incredibly striking in the outer primaries, but when we properly looked, we noticed there was almost no black which would suggest a white-winger influence. The consenssus after the initial excitement of a possible Japanese gull wore off was that it was most likely a hybrid Glaucous Gull x Great Black-backed Gull. A fascinating bird!

I've just read this back and I apologise for the length! Hope you enjoyed it though.
Posted by Zac Hinchcliffe at 13:47:00 1 comment: