no, Its not just blog of dirt on a grey screen...this is actually the best I could do in the conditions at dawn Alston Res!

I arrived at Alston at 07.10 in pitch black and set up camp hoping to turn the faint black blobs on the black water surface into a Smew. As the light improved, the fog didnt, but I managed to pick up 19 Goosander and 2 smaller birds with White faces, result, the birds has roosted overnight. As I was about to send the news to Bill Aspin, i thought I could see another 2 smaller birds. I later confirmed that all four birds had roosted overnight at Alston Res. The fog made photographic conditions a nightmare. I managed to get a couple of poor videos of one of the birds which was a little closer and less flighty. At 08.18 the birds took flight and circled the res a few times, coming past me twice and headed off E/SE. My d-SLR was on self timer for some reason and there was a horrible 10 second lag time between the time I pressed the Shutter and the time the shutter opened!

I thought I would check Spare Mill Res before I checked the Ribble but only had 3 Goosander and 4 Goldeneye on here...with a raptor that I maybe shouldn't mention on a public blog.

I arrived at the Ribble at 09.30 and had a flock of 9 Pinkfeet over >SW. I was down by the river when the 4 birds with whistling wings alerted me from above and I watched them in flight for about 1 minute before I saw them come to a land towards the western end of Jackson Bank's Wood.

(Bill Aspin later found 3 of the 4 birds on the Ribble from Bezza Road, so the 4th is somewhere in the west Ribble Valley)
Posted by Zac Hinchcliffe at 13:23:00 No comments: 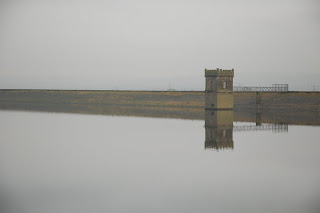 Alston Reservoir No1 (circular) - 22nd Jan
The week before my last A level exam of January, I really didn't want something bird-wise to take my attention away from Biology revision. News of 4 reported redhead Smew on the River Ribble in the Alston area was just the news I didn't want to get.
It was less than a year ago before I saw my first Smew up at Lower Black Moss Resr in Barley, Clitheroe, so I felt I must attempt to confirm the record as a flock of 4 would be the largest group to be recorded in the ELOC recording area.
I finished college at 10.30, so when I got the text about them, I was quick to get into action and was managed to confirm their presence at 12.44.
The birds were in loose association with Goosander but were distinctly more flighty and whilst relocating to get a better view for photography, I caught sight of the birds flying past me downstream on the Ribble. One bird seemed a little larger and has noticeably more white on the wings which lead me to age and sex this bird as a 1st winter male with 3 female.
I relocated the birds further downstream but before I had a chance to get a photo, they caught sight of me and took flight again. Their flight pattern when flushed caused them to fly almost 1/2 mile downstream each time which was rather tiresome to say the least!
I finally caught sight of them for a fourth time and was just about to press the shutter when they took flight again! I saw no reason that I was the cause but then I saw a dog walker next to the river and found the reason. I saw the birds land behind the island next to Alston Old Hall.

On the 21st Tony Cooper tried to be the 3rd birder to get a sighting of the birds but failed to locate them. As they were moving downstream, I felt that they could be heading towards the pits or surrounding river at Brockholes which would be a patch first. Robin Shenton had a look but couldn't find them.

22nd Jan, there was no news either way but my thoughts were leading to that I was the only birder to confirm a sighting and wasn't able to get a record shot of the largest flock to be recorded in East Lancashire. I was talking to Bill Aspin and were suggested that Goosander from the river roost on Alston Res, so I payed a visit before dark on the Friday but only had 1 male Goosander with no smaller sawbills in tow. I left at 3.15 so there is a chance they came in later on with the other Goosander on the river. Also present were 34 Goldeneye, female Tufted Duck and 2 male Teal

23rd Jan. I had just finished a mock exam and saw that it was approaching 4.15 so I made a decision to check the roost one more time. I quickly found a group of 5 Goosander but sadly i couldn't see any white cheeks in the red heads. I was losing hope for the birds so I decided I would check the large roost of smaller gulls (Black Headed and Common) for a Med or Ring Billed Gull (optimistic I know!) when i caught sight of another 4 Goosander, It was extremely misty and visibility was a little restricted in the fading light. I suddenly caught sight of 2 smaller birds with them and assumed they were the Teal from the day prior. The Visibility slightly improved and I could make out 2 Smew! I rang Bill with the news and he was just about to send the text that Nick Green had 2 Smew on the Ribble at the same time as me! Nick's birds are near Redscar Weir at Redscar Wood meander so are very close to being recorded from Brockholes!
Posted by Zac Hinchcliffe at 17:13:00 5 comments:

Although there are no photos from my day out at Marton, I had an extremely productive day.
Paul Ellis and Craig Brookes had a probable American Bittern with a Eurasian Bittern on the evening of the 16th. If this is confirmed, then It would be the 2nd for the site, which is an amazing claim to fame!
I arrived on site at 07.15 and whilst walking to the Fylde Bird Club Hide, I saw a nice Woodcock flying overhead. I got into the FBC hide at 07.20 and the first bird I saw was a Bittern flying high over the site heading West. Flying into the wind, I was able to watch it for at least a minute and was able to confirm that it was a Eurasian. After this I wasn't long before I spotted a Short Eared Owl (year tick) hunting over the island.
I moved along when it started to get a bit lighter and headed towards the western end to see If i could get a Bittern out on the ice. I was quickly rewarded with a chattery song and an excellent view of a Cetti's Warbler.
I didn't have any more Bittern after my first one, so I headed to the causeway where I met up with Chris and Stuart Piner and a host of about 30 birders. I managed 2 Long Eared Owl and 293 Black Tailed Godwit that came onto the ice and roosted. I left the site at 11.30 to do some revision at home.

I ofcourse came back for dusk as an American Bittern is a bird I refuse to miss (I wasn't born for the 1991 bird...like that is an excuse!) I arrived back onsite with my parents at 3.30 and went to the causeway to again watch with the assembled birders....Stuart and Chris hadn't left yet, even though they arrived at 7.30. Between 3.30 and 5.00, we had 4 Bittern showing really well (we couldn't conjure up an American Bittern out of them... A flock of Pinkfeet flew over holding a Barnacle Goose. For now, the 21st century remains without a confirmed American Bittern on the British List...
Posted by Zac Hinchcliffe at 19:05:00 1 comment: 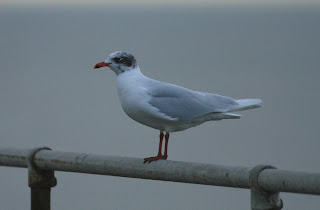 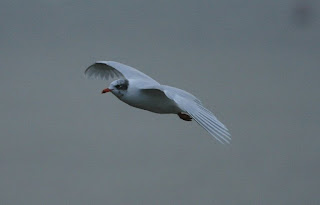 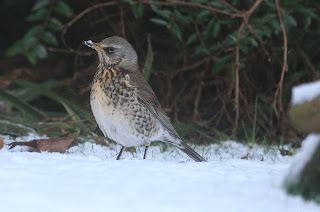 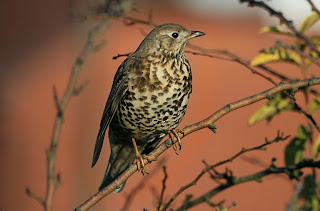 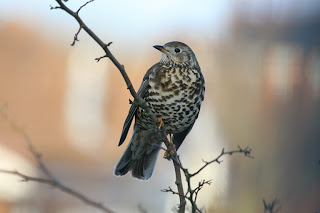 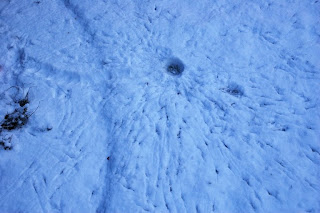 As the snow fell on my garden lawn, so did the birds. My usual Blackbirds were joined by 3 Fieldfare, 2 Redwing, 2 Mistle Thrush (1 being a presumed 1stw winter female) and a Song Thrush, all feeding on Apples and Raisins I put out for them.

My College was closed on Tuesday 4th and Wednesday 5th which allowed me to spend time watching the different behaviour of birds in the snow. For example, Magpie was seen 'flycatching' snow flakes from my bird table and it kept flying to and from thin air.

Ever since the Mistle Thrush's have appeared in the garden, nothing else has! One particular Male was an absolute brute of a bird that mobbed everything within a 30 meter radius of his apples. The worst thing was that he generally just sat in a tree not even eating food himself which seemed pointless.

Apart from the unusual visitors to my garden(that made revision difficult due to their entertaining antics), I managed to make a quick stop at the beautifully wintery Cottam Brickworks and managed to see the (now aged at 1st winter) Willow Tit at the feeder for my Yearlist.
Posted by Zac Hinchcliffe at 16:52:00 6 comments: 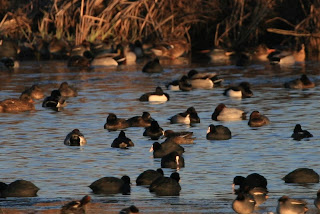 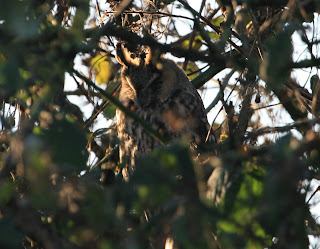 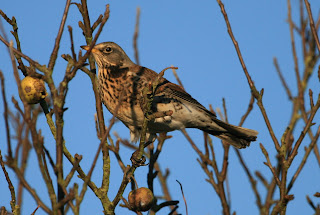 An early morning trip to Marton Mere with Chris Piner was in order to seek out the ever present Cetti's Warbler, as neither of us had seen then on our Fylde list (Chris hadn't seen Cetti's at all)

We started in the Fylde Bird Club as we felt this was probably our best bet. Within a couple of minutes Chris alerted me that he though he had just seen the Ring Necked Duck. I got onto the bird quickly and confirmed the ID, so sent out the news to local bird networks. It was far more active today compared to when I saw it at Thornton. With not having a compact camera with me at the time, I wasn't able to digiscope any shots so the poor photo above was with a 400mm d-SLR.

After a short time, we decided to check for the Owls and come back for the warblers later on. We checked the Bridleway for the owls looking deep within the vegetation. This caused embarrassment when a runner pointed one out just next to the path. We managed to see all 3 Long Eared Owls with relative ease.

Heading back to the Fylde Bird Club hide, we bumped into Bill Aspin, John Wright, Margaret and Mark Breaks. They had successfully twitched the RND. Back in the FBC hide, we managed to see a Water Rail casually walk across on the ice which was a year tick for both me and Chris.
Bill Aspin then rang up to tell us that they had heard a Cetti's on the other side, which we were able to catch up with with relative ease. It was quite elusive but both me and Chris were able to hear it call and briefly see it. A nice Fylde and Lancashire tick.

(we headed to Warton Marsh for high tide, but as the tide failed to flood the marsh, we left quite soon after seeing very little!)
Posted by Zac Hinchcliffe at 13:57:00 2 comments: