I popped back home this weekend to go to the Doncaster game at Bloomfield Rd and hadn't intended on doing any real birding, except for the Big Garden Birdwatch 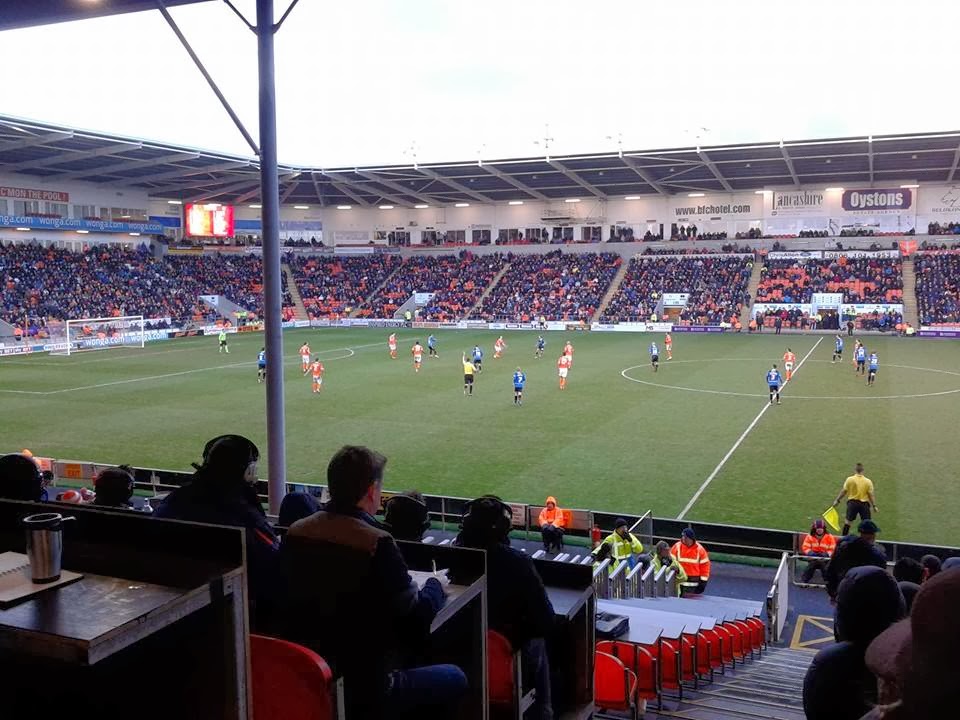 It therefore came as some surprise when an inland Hume's Leaf-warbler turned up on Saturday. I decided to go for it and Alex Jones and Steff Leese picked me up from Crewe station and we were onsite within an hour. 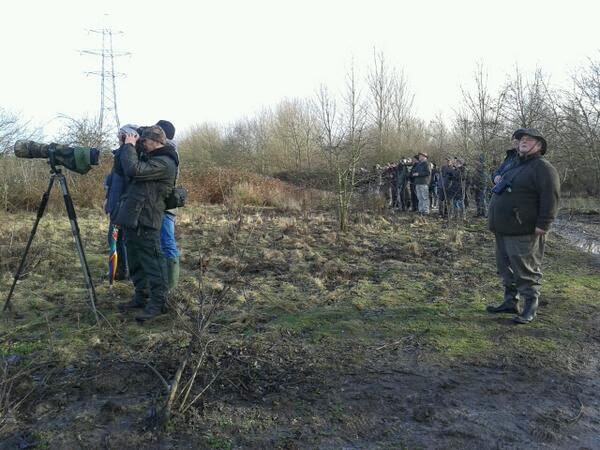 A decent turnout for this bird, and to be honest, more than I was expecting. It hadn't been seen for 20 minutes by the time we arrived, but the sun was just about to come out, so we were hopeful. After 15 minutes or so, after meeting fellow NGBirder Craig Reed, the bird started calling and then flew across the open into vegetation. The call very educational indeed. It sounded very similar to Yellow-browed Warbler, however where YBW rises more on the second note, this bird seemed to finish the same pitch as the first one started, so sounded very similar to the 'chissik' call of Pied Wagtail.
Before too long, the bird came out into the open and upon first views, I really wasn't blown away. Now before I say this is because it was a rubbish bird, it was only because it came across as really bright, with the paler parts seeming really yellow and therefore not really all that distinctive from Yellow-browed. I was a touch worried about it.

It then flew across and landed in a small hawthorn at 50ft range, and then fed actively, including flycatching and hovering. This was much much better showing almost silvery underparts and just a much more overall cold appearence. Much more like it!
In addition, the tertials seemed like them were 'misty' as in the contrast between the dark centres and the pale fringes were a lot less contrasty and the second wingbar on the median coverts was much more less distinct the the greater coverts wing bar, unlike on Yellow-browed where they are quite similar.

A really great bird that showed on and off in the sun and remained vocal throughout and whilst being so silvery, you could pick it up at great distance with the naked eye.

Next we moved onto Chasewater as Alex and I still have never seen a Caspian Gull, so with up to 5 showing regularly in the gull roost throughout the winter, we were hopeful. We got there quite early and there was only a small amount of gulls present on arrival, but 2 Yellow-legged Gulls were picked out. As a small crowd formed, it wasn't too long before a 1st winter Glaucous Gull was picked up distantly. Even at this distance, it was an enourmous bird with really obvious two-toned bill. 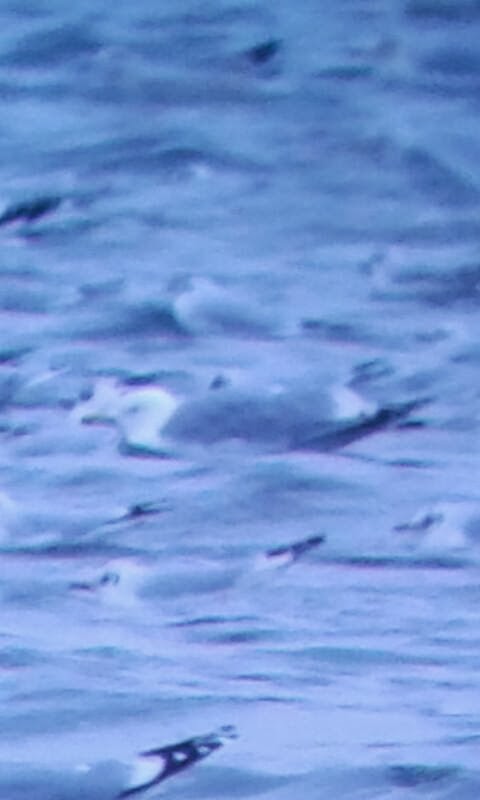 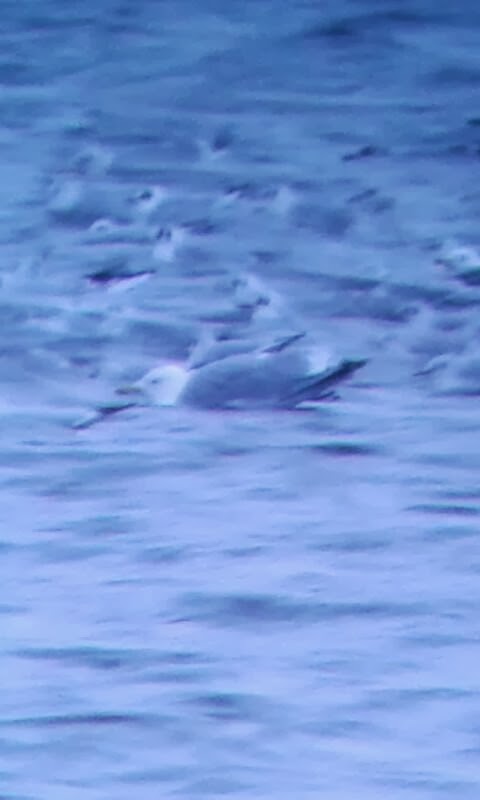 Alex then picked up a clean-headed, small and beady-eyed LWHG. This looked really good. The mantle shade was slightly darker than the surrounding Herring and Black-headed Gulls. The head was perfectly clean with a sloping forehead giving it a somewhat snouty look. In addition the eye was really tiny, dark and gave the face that classic 'rat-like' appearance. In terms of the bill, this looked good too being very long, very narrow and parallel-sided with next to no gonydeal angle. It had an obvious yellow-tip with a much greyer/greeny base. The red on the gonys was restricted to the lower mandible too. It was looking superb. The tertials had a really big white 'moon' which I'm not sure is a distinctive feature, but it certainly was noted. In terms of primaries, there wasn't all that much white which didn't help the case, however the primary 10 did have a white tip. It never flapped whilst we were watching it, so the underside of the primaries were never noted to the tongue on the inner web of p10 was never clinched. Everything was looking pretty bang on, however for whatever reason, it just didn't seem 100%. I can't put my finger on it, but perhaps the slightly short primary projection made it look odd?

I am not entirely sure what this bird actually is. I think the fact that we picked this bird up separately three times within the flock is a little worrying in terms of it being something good. It could well be a Caspian, but given the photos and that we didn't clinch it at the time, I think this is probably best left alone...
Posted by Zac Hinchcliffe at 18:06:00 1 comment:

A cheeky spot of Bunting sexing

Ok, so back in 2012 I learnt an awful lot about moult, alternate ageing and sexing of many passerine species during my time in Sweden.
I've recently been going through my photos for an up and coming presentation I am giving to Bangor Bird Group.
Anyway, I remember learning an awful lot about Reed Buntings whilst I was there as we caught 169 during my visit.
I came across some photos of juvenile birds and thought it might be interesting to show a few sexing features of juvenile Reed Buntings before/during post-juvenile moult. 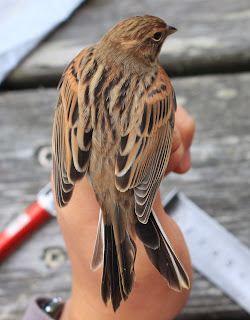 This bird is undergoing post juvenile moult into 1st winter plumage. The growing tail feathers show the adult-like broad rounded tips to the feathers, whereas the fully grown unmoulted tail feathers are relatively thin and pointed. This shows it to be a juvenile bird.
The mantle here is one of the key features for sexing. This shows subtle pale tramlines just off centre and the rest of the brown feathers is fairly pale and soft brown. In addition, the black streaking is quite diffuse and thin. 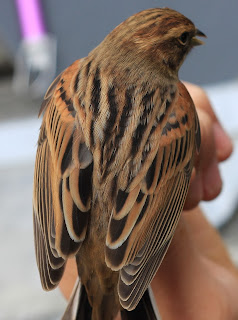 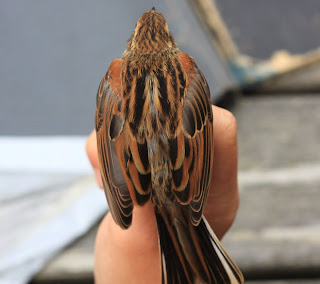 Ok, so now we move onto the male. Everything about the male is more rufous and more bold.
The mantle shows much bolder black streaking, with the paler feathering being much more rufous than the female. The fringing to the greater coverts is much narrower than on the female, plus the lesser coverts are very rufous indeed. Finally, the fringing to the tertials is rufous and brown with no real hint of any cream/white fringing.

Just a small blog post with a couple of features that you may already be aware of, but if not, hope you enjoyed it.
Posted by Zac Hinchcliffe at 12:27:00 No comments: 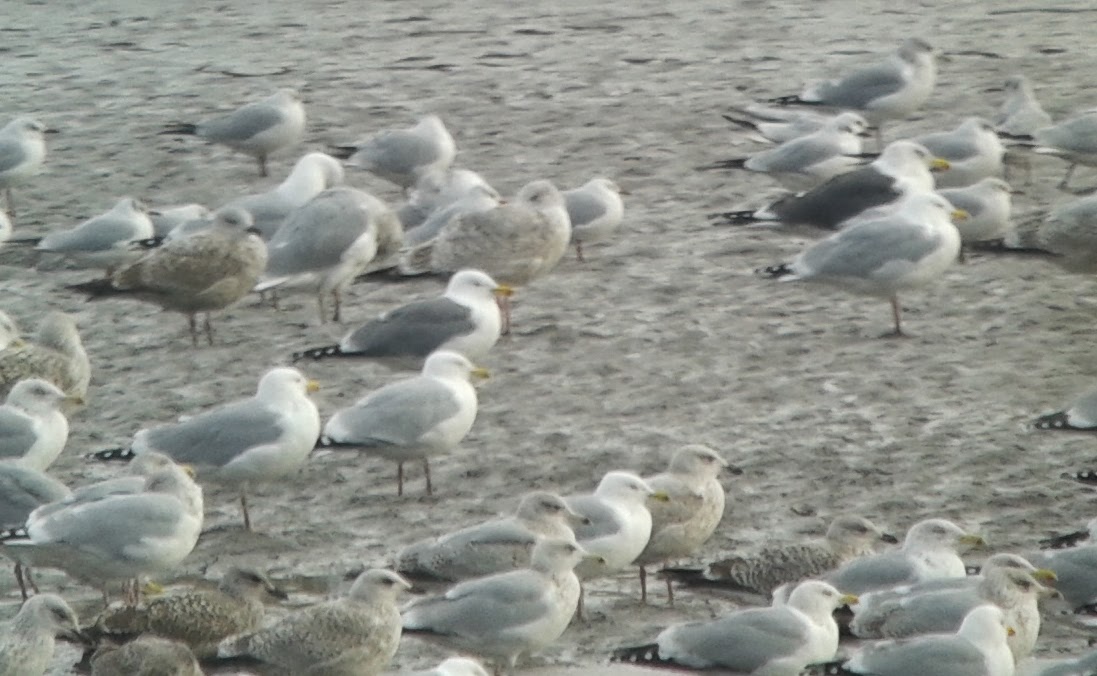 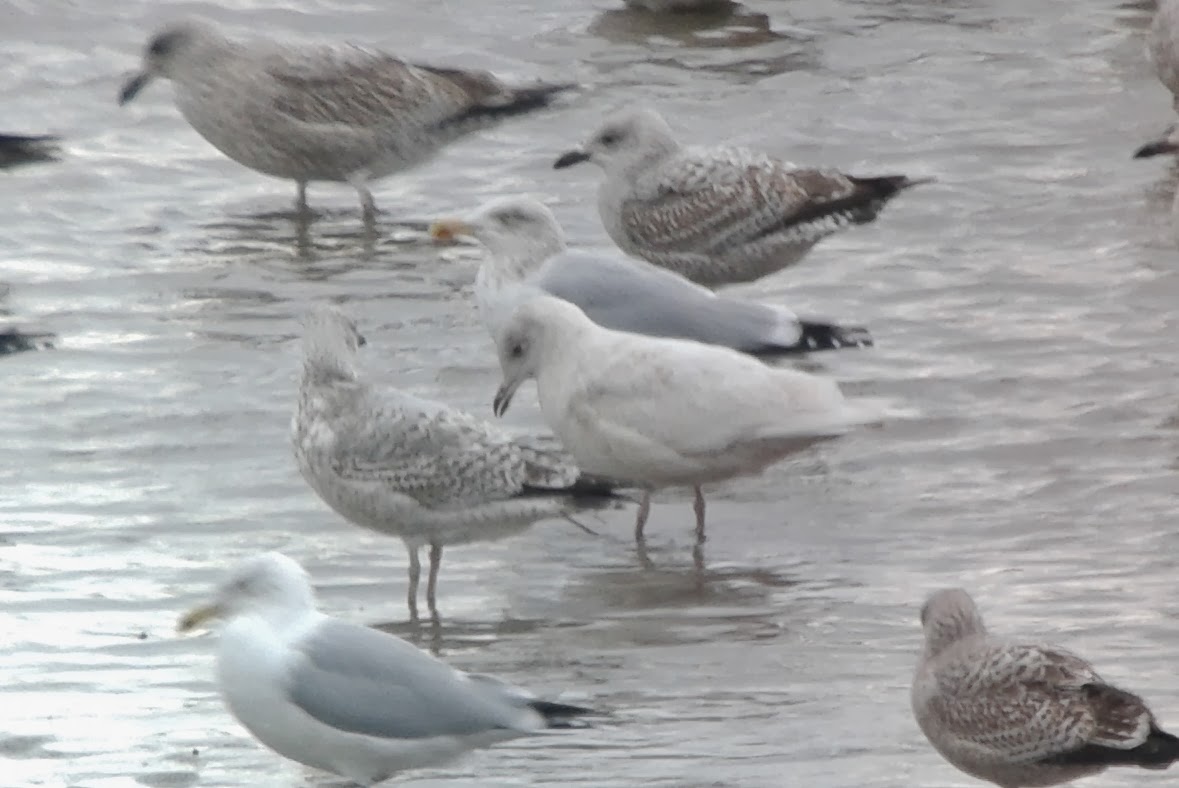 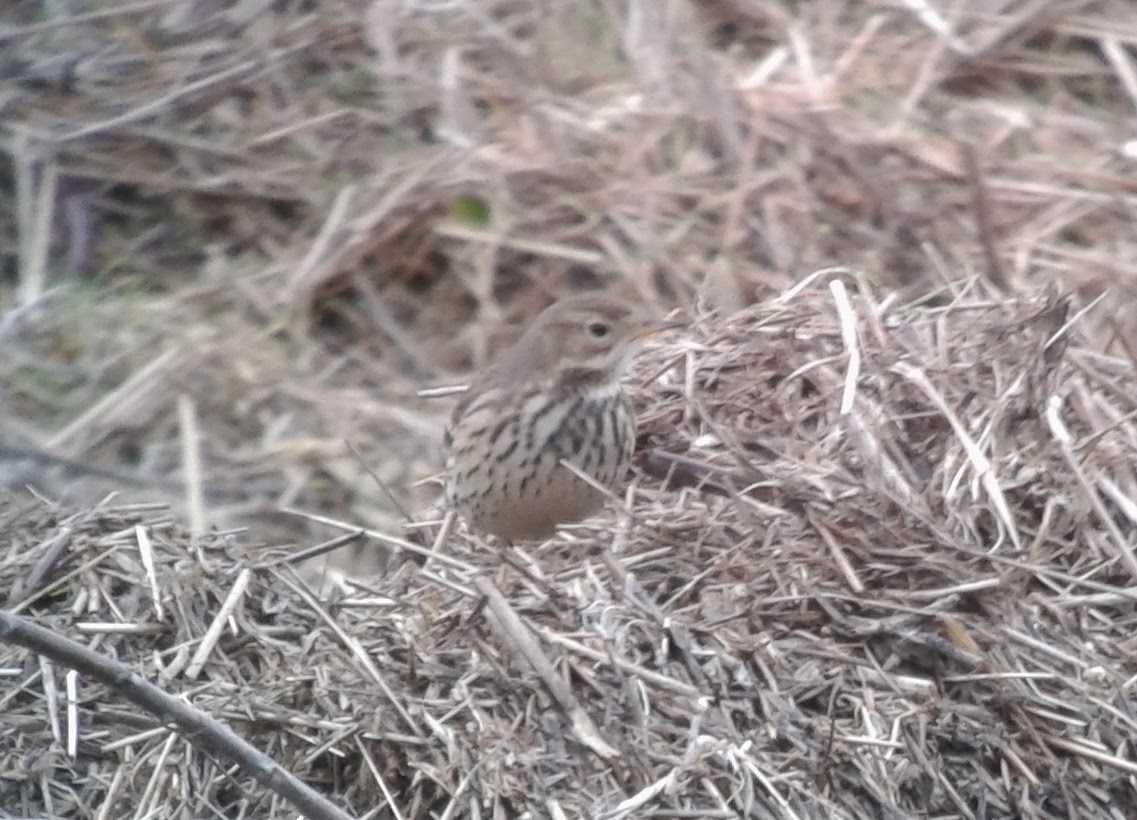 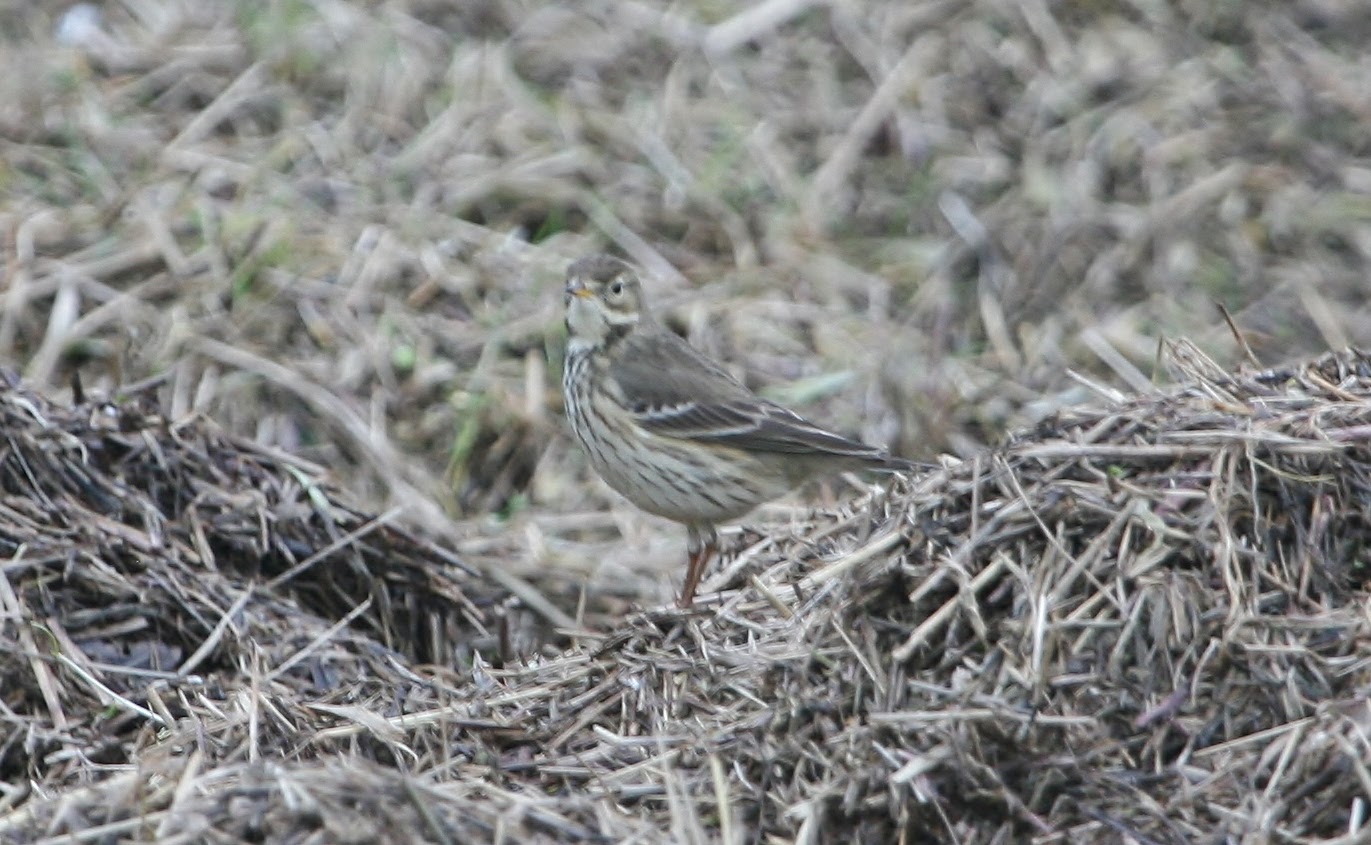 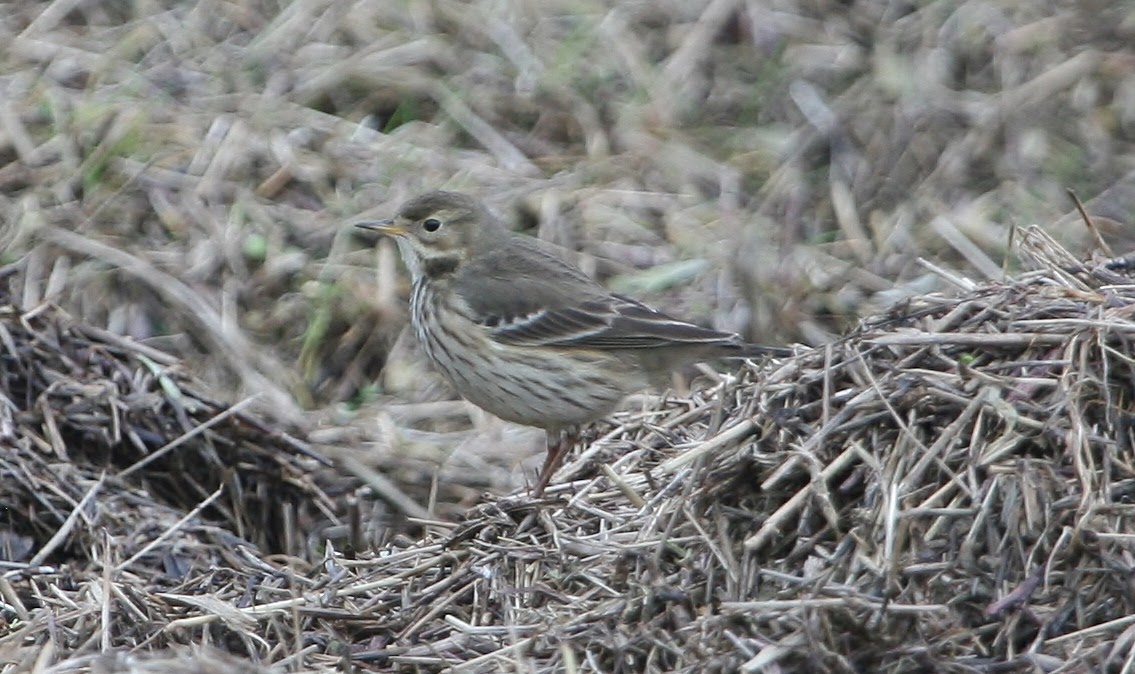 I joined Alex Jones on the Wirral today to mop up on a few yearticks and generally just do some nice birding.

We started off at Richmond Bank nr Warrington/Runcorn. Here we spent most of the morning looking through the gulls trying to find that ever elusive Caspian Gull for the 3rd time this year (first two attempts were in the midlands). I think they must know how much I want to see one as I just can't see one whatever I do!
We managed to come across three Iceland Gulls during the morning (2x 1stw and a pale 2ndw). Apart from this, it proved rather difficult. We managed to find a very odd looking gull that we think is the same bird that Alex found last year - a Yellow-legged x Lesser Black-backed Gull hybrid. Very odd indeed!

We then moved onto Burton Mere to get better views of the American Buff-bellied Pipit as both of us saw it at the end of 2013, but in pretty windy conditions so obtained poor scope views. Today however, it was much better. After a while we were able to get fantastic views of it and were even able to pick it up with the naked eye at 10m! Excellent bird, despite not being the most exciting looking thing...still enjoyable to see.

With light starting to go, we decided to make a quick visit into Burton Mere and quickly were put onto a lovely Little Stint. A nice bird to get in January!

We ended the day at Parkgate and were able to get nice views of 2+ ringtail Hen Harrier. Beautiful birds.

I have had quite the January so far and after today, my yearlist is on 153! Not at all bad!
Posted by Zac Hinchcliffe at 21:09:00 No comments: 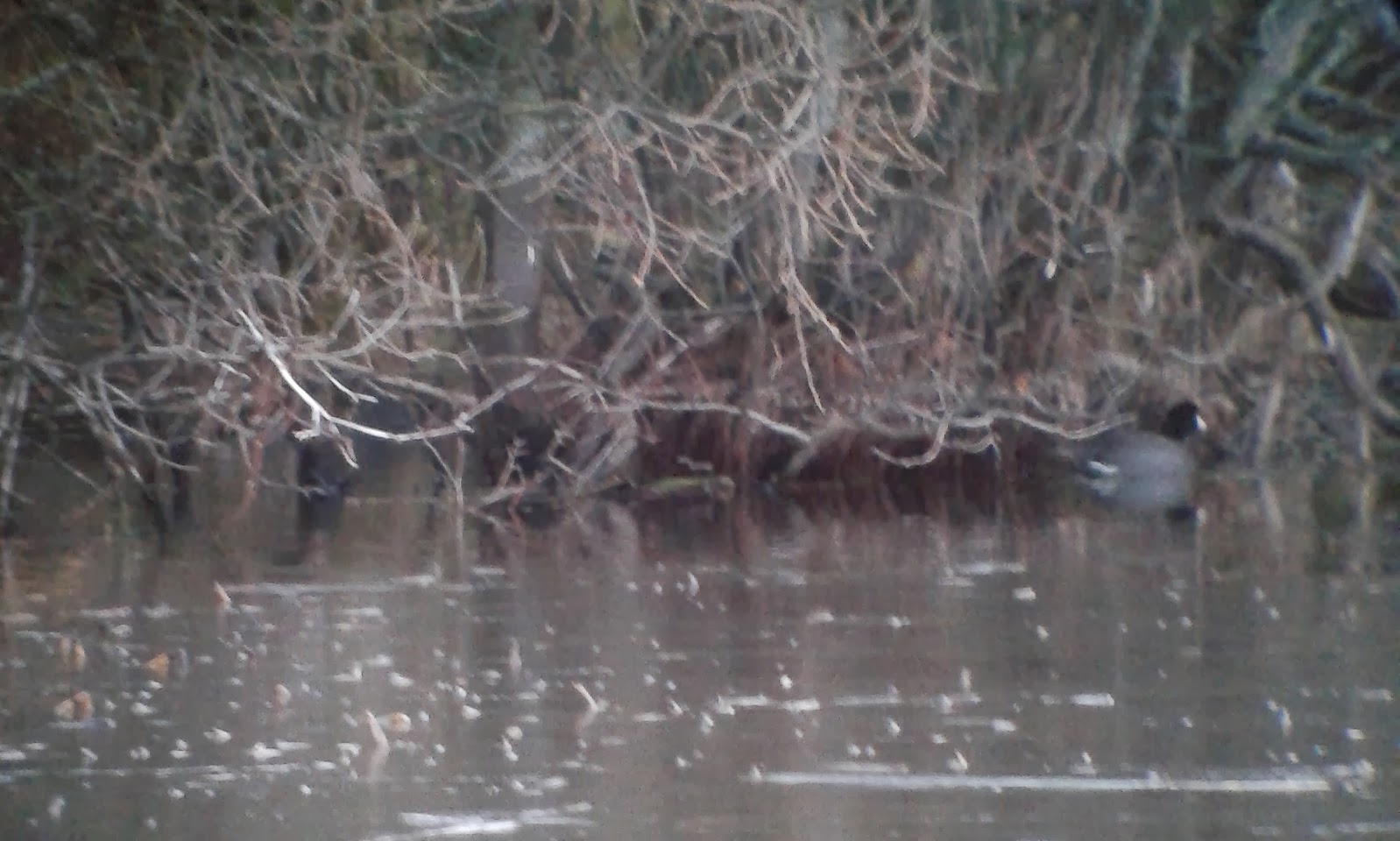 I've taken some bad photos of birds in my blogging history, but this is one of the top ten worst! But at the same time, you can tell it's a coot with a small bill and white undertail coverts! Loch Flemington - Dan Pointon, Chris Bridge and Alex Jones (and a randomer on the left) 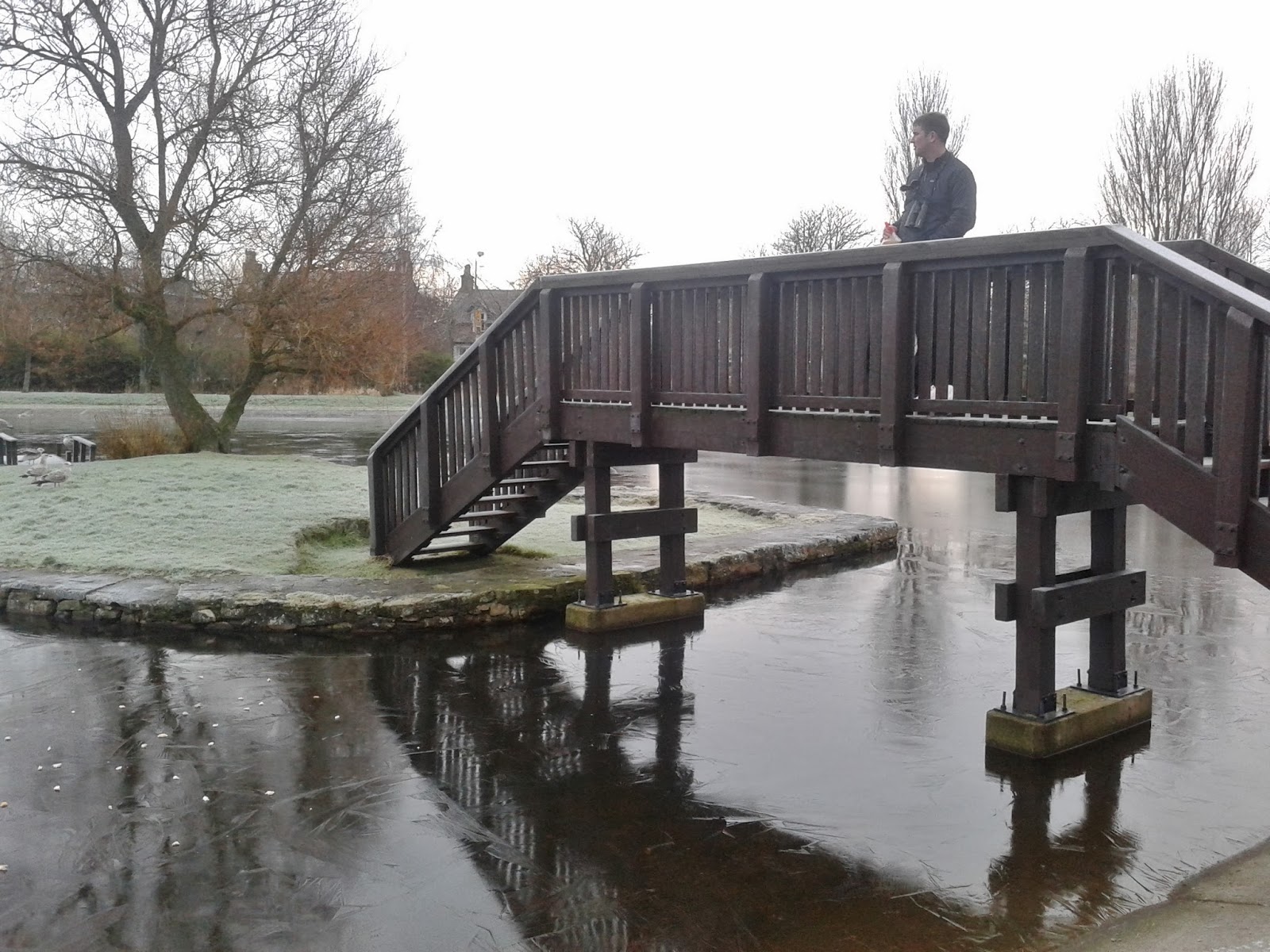 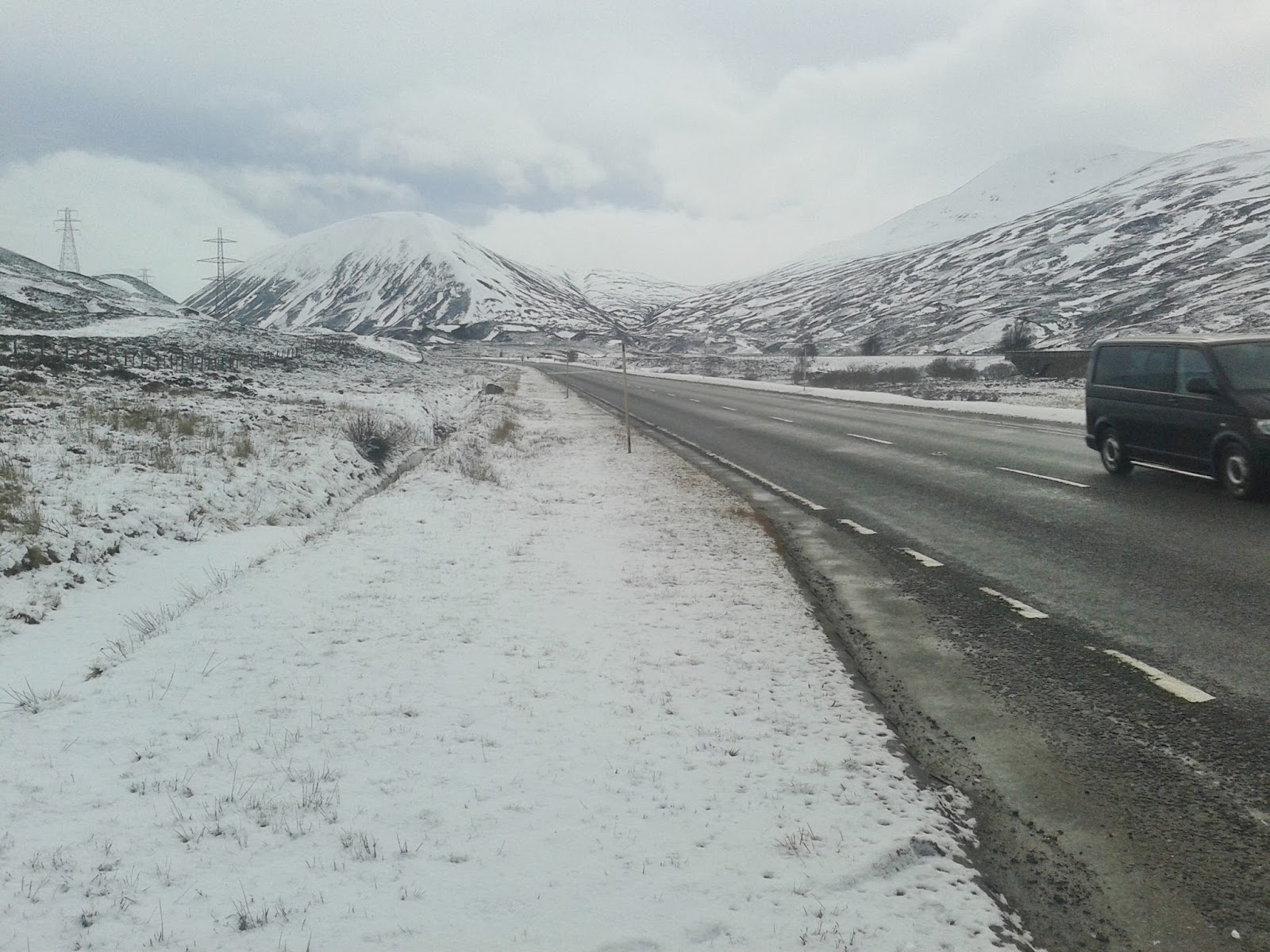 Snowy Scotland on the drive back!

Last Sunday, Alex Jones drove Chris Bridge, Dan Pointon and I up to Lock Flemington to see the 7th for Britain American coot. We stayed in a Travelodge in Inverness on Saturday night for a dawn start. It makes sense now we look back, but sunrise wasn't until 08:50 so it wasn't an early start at all!
We managed to get the coot almost straight away and it was a fantastic little bird! Surprisingly small, being only 5-10% larger than the surrounding moorhen. Chris and I deduced it was a 1st winter bird, providing it follows the same ageing criteria as Eurasian coot, with grey flecking on the belly and dull grey legs. A really greatbird to see and one I'm really glad I made the tortuous journey to see!

Next stop was Dingwall just north of Inverness to look for the ever present ring-billed gull....of course, the day that we went, it wasn't ever present and we weren't able to find it....

To regain a little more optimism from our trip, we decided to go into the pine forests, looking for the specialities. We decided that with the exception of capercaillie, the rest are mainly pot luck, so we went to a caper site and within about 20 minutes managed to find an incredible 7 including 6 males! This was a much needed lifer for me, so 2 lifers in the day was fantastic! Remarkably, these were pretty much the only birds we heard or saw in the forest! No sign of any crossbill, no crested tits, no nothing!

Finally, we went up to Mt. Cairngorm to the car park at the ski centre to look for ptarmigan. The weather was much worse up here with gusts of 40mph wind, snow and grit and about -3oC! We managed to find 7 snow buntings, a mountain hare and eventually 2 lovely white ptarmigans.

A great trip and I'm really thankful to Alex for driving as it must've killed him! Inverness is farrrrrrr!
Posted by Zac Hinchcliffe at 20:44:00 1 comment:

Anyone would think I was doing a big year! 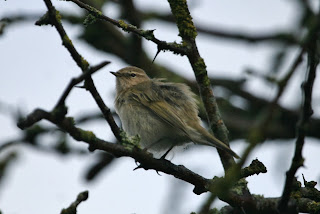 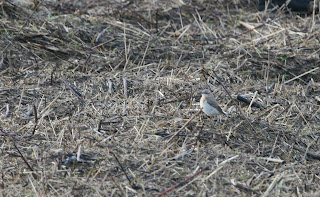 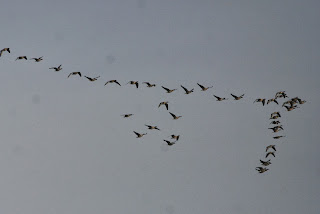 One of many skeins of Pink-feet 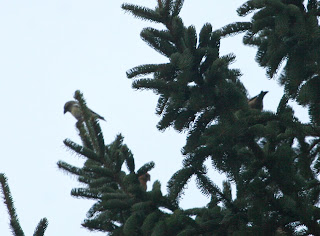 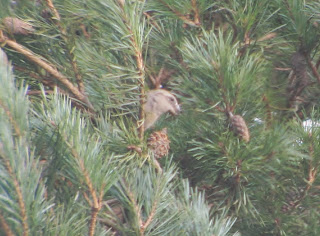 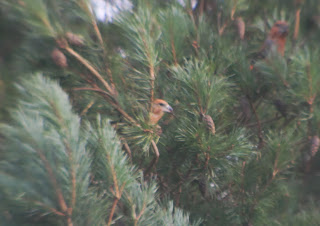 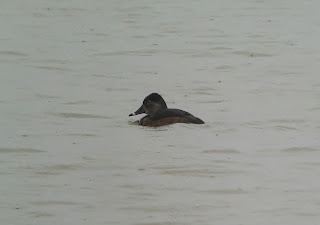 A remarkable start to 2014 saw Matt Bruce and I head alllll around 'Northern' England to tot up 125 species in just 4 days. By far my best start to a year.

Considering I've not done any seawatching, these highlights show the quality of Midlands reservoir watching!

I also got sound recording equipment for Christmas, so I managed to test it on Two-barred Crossbill and was really happy with the results.


An impossibly tiring few days, but boy were they amazing! Thanks Matt for driving the whole way and making it so epic!
Posted by Zac Hinchcliffe at 10:43:00 2 comments: